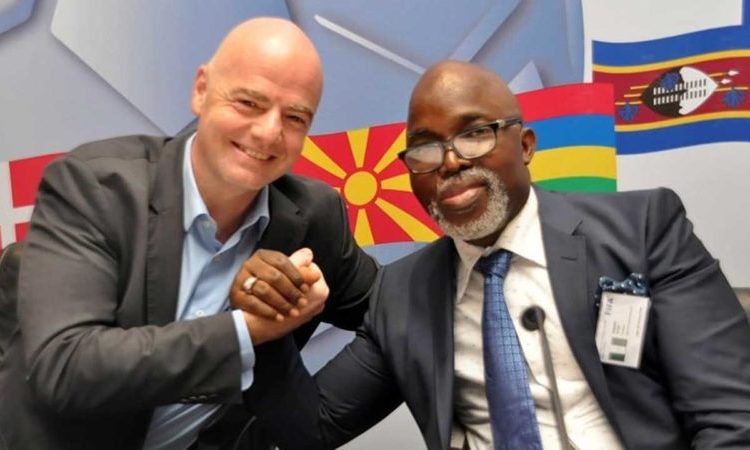 The Nigerian government has recognised Amaju Pinnick as the authentic president of the Nigerian Football Federation (NFF), avoiding a last-minute Fifa ban from next month’s African Cup of Nations qualifiers.

Fifa had given Nigerian authorities until 12 noon on Monday to resolve the leadership tussle inside its football governing body. Read more at https://allafrica.com/stories/201808210026.html

CAF Confed.Cup: Enyimba One Step Away From Knockout Stages

The Peoples Elephant clinched the much-needed points thanks to Farouk Mohammed’s late goal after goalkeeper, Theophilus Afelokhai had made some brilliant saves…

After overcoming Djoliba 1-0 in Bamako on Sunday, Nigeria’s flagbearer, Enyimba FC will be hoping to pick the maximum points in their last Group C encounter against CARRA Brazzaville in the CAF Confederation Cup on August 28.

The Peoples Elephant clinched the much-needed points thanks to Farouk Mohammed’s late goal after goalkeeper, Theophilus Afelokhai had made some brilliant saves to end the host hope to make it through to the knockout stages of the tournament. Read more at https://www.soccernet.com.ng/2018/08/caf-confedcup-enyimba-one-step-away.html

Madu, 25, penned a four-year contract with the Madeira- based club. Read more at https://www.completesportsnigeria.com/portuguese-club-cd-nacional-complete-christian-madu-signing-from-enugu-rangers/

The world football governing body, Federation Internationale de Football Association (FIFA), has shelved its plan to ban Nigeria from international soccer, citing the Federal Government’s pledge to abide by the protocol binding member-countries of the body.

FIFA had last week given Nigeria up till yesterday to ensure that the duly elected board of the Nigeria Football Federation (NFF), led by Melvin Amaju Pinnick, exercises its functions without undue government interference. It threatened to ban the country indefinitely from international football if government did not meet the terms of its protocol. Read more at http://guardian.ng/sport/fifa-shelves-ban-on-nigeria-vows-to-monitor-nff-situation/

The newly opened Stephen Keshi Stadium, Asaba may host Nigeria’s African Nations Cup qualifier against Libya in October. That is if the Nigeria Football Federation’s (NFF) technical committee certified it fit to host the clash.

The Super Eagles will meet Seychelles in their next match in the qualifying series on September 8 before coming back home to play Libya on October 13. The Eagles will jet out to the North African country immediately after the Asaba battle for the return clash in Tripoli on October 16. Read more at: https://allafrica.com/stories/201808210067.html