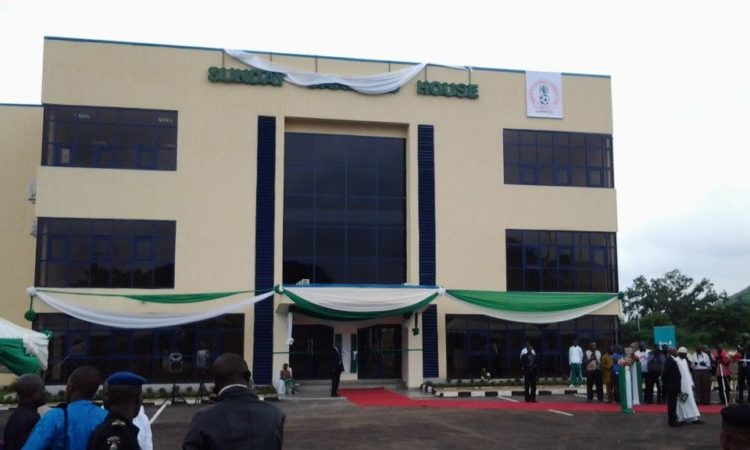 The international governing body of football has issued ultimatums to the two countries over outside interference in their football associations.

Nigeria and Ghana are both facing international suspensions by Fifa after a final notice was issued on Tuesday over outside interference in their football associations.

U20WWC: FIFA Clarifies On Who Scored Nigeria’s Equalizer Against China

FIFA has clarified that Rasheedat Ajibade did not score the equalizer in Nigeria’s 1-1 draw with China at the ongoing U20 Women’s World Cup France 2018, despite the goal initially credited to her by the Swiss-based organization.
Substitute Aishat Bello’s inviting cross saw Ajibade challenge for the ball with China right-back Jiaxing Dou and the ball struck the defender before ending up in the back of the net. Read more: http://www.allnigeriasoccer.com/read_news.php?nid=28888

The World Cup Record Still Held By Okocha That May Be Impossible To Break, Not Even By Hazard

International Austin Okocha turns 45 today, August 14 and in honour of his achievements, Squawka has reminded everyone that he is a holder of a footballing record at the World Cup.
The former Paris Saint-Germain number ten represented Nigeria at three World Cups  1994, 1998 and 2002, playing nine matches in total.
”Happy birthday, Jay-Jay Okocha! ?? Since @OptaJoe collected data in 1966, no player has completed more take-ons in a single World Cup game: 15 vs. Italy in 1994. …they tweeted twice,” Squawka tweeted. Read more: http://www.allnigeriasoccer.com/read_news.php?nid=28887

Nigeria’s chances of shining at the forthcoming U17 AFCON zonal qualifiers in Niger Republic have suffered a major blow after at least 15 of the 40 best players failed the mandatory MRI age test just two weeks to the big kick-off.

Some feelers have even suggested that the players who failed could even be far more than officials were ready to divulge. Read more: http://scorenigeria.com.ng/2018/08/14/eaglets-u17-afcon-hopes-shattered-after-15-players-fail-age-test-star-strikers-sent-home/

The chairperson of Nigeria Football Federation (NFF) women committee, Alhaja Ayo Omidiran and general-secretary of the soccer governing body, Dr Mohammed Sanusi have both expressed delight with the Falconets’ qualification for the quarterfinal of the FFIA U20 Women’s World Cup in France.

Omidirana nd Sanusi were both gleeful, after Rasheedat Ajibade’s late equaliser sent the team into the 9th edition oif the competition, following a 1-1 draw with their Chinese counterparts in Dinan/Léhon on Monday evening. Read more: https://footballlive.ng/omidiran-sanusi-relish-nigerias-quarter-final-spot/