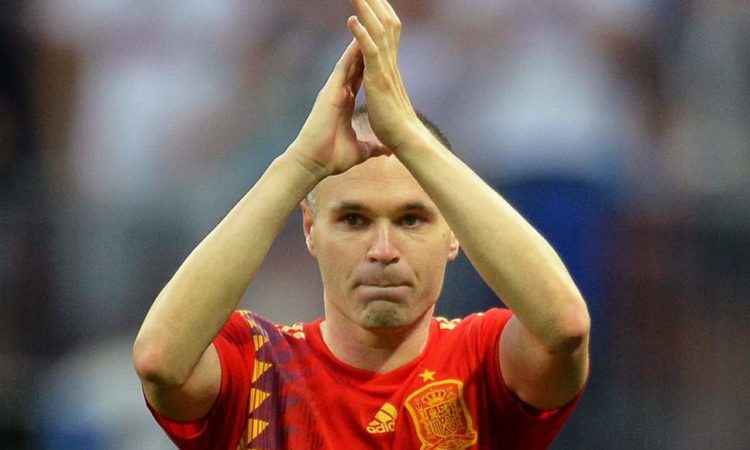 The Barcelona Legend Andres Iniesta, has made it known to the world about his decision to quit international football after his country’s unexpected exit from the world through penalty shootout which Russia came out victorious.

After seeing his national side being leveled to 1-1 by the Russians, Andres Iniesta tried all he could to salvage the required three points for Spain after he came on as substitute in the second proves abortive, as they were sent packing through penalty shootout by the host country.

The 34-year-old has been tipped to call it over on his blistering career for Spain even before that tournament, however, the prediction was right as the final whistle was blown on Sunday.

According to Radio Estadio, the Spanish superstar said, (Today is my last match with the national team. A wonderful stage ends and sometimes the finals are not as you want).

Andres Inesta who has spent a total of 22 years in his boyhood club FC Barcelona, where he has won all the necessary trophies certain to win. But announced of his retirement immediately after an impressive campaign last season for Japanese League.

Iniesta, who have won two continental championship and a world cup as he has made name for himself in the world of football.

Despite converting his own spot-kick, it was enough to save Spain from elimination as the Russians were determined not to allow mistakes after two Spanish players missed their own spot-kick.

The Spanish supporters were left in tears as Koke and Iago Aspas missed their spot-kicks, while Russia cruised to the quarter final.

Chelsea’s Cesc Fabregas, who has been with the BBC studio, held his head while the penalty was being taken as his dear country were dumped out of the World cup.

Fabregas began his post-match analysis alongside BBC pundits Gary Lineker, Rio Ferdinand and Alan Shearer, as he  (I’m speechless to be honest, Because I expected a different type of game today. I’m not saying that I expected an easy win, but I think Spain is a much better side than Russia. From what I have seen today, Russia had a plan and that was to get to penalties and pray. And it paid off for them. I’m sad, because seeing the faces of my team-mates, my big friends. Andres Iniesta has probably played his last game for Spain and he didn’t deserve to go like that).

This have been a disappointing tournament filled with drama for the Spanish team, firstly their coach Julen Lopetegui was sacked just four days to the World cup after he was signed by Real Madrid.

Andres Iniesta has been rated as one of the diminutive decorated Spanish Player of all time.

This year’s world cup would have been for Spain to lose boost Fabregas, but the way of which they were eliminated is very disappointing, Fabregas made it known on the confidence the Spanish supporters have in this team, he said (There was a lot of hope in this generation, Everyone was expecting at least semi-finals and so everyone will be disappointed for sure. I don’t know if it was a very negative effect but definitely something, when you have been working with a coach for two years, he has the plan, the moves of the whole country and it changes things. He didn’t do the right thing at that time – it is a shame, and I am sad).

However, Iniesta has headed to Japan to help build and attract other big players to join.