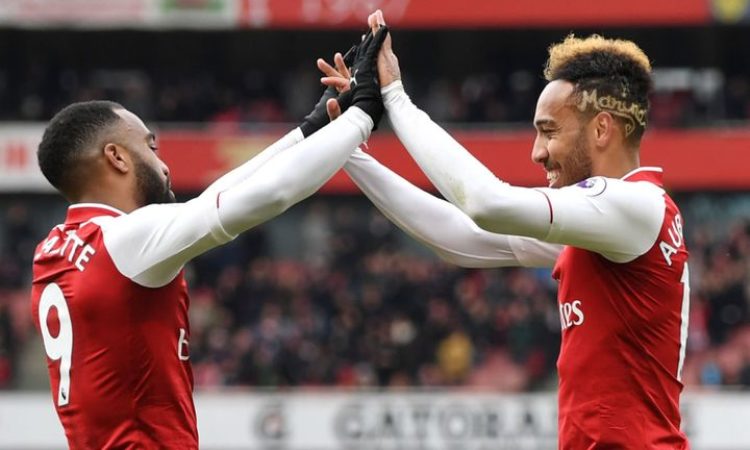 Aubamayang and Lacazette, are both expected to dazzle when the new league season starts. The two players who arrived last season though at different transfer windows, are expected to play crucial roles in the clubs trophy ambition.

Alexandre Lacazette who joined the Gunners from Lyon in a reported £46.5 Million, failed to justify his price valuation as injuries and lack of form limited him. The 27yr old Frenchman, could only muster 14 goals and 4 assists in 26 league appearances for the Gunners and this eventually resulted in him missing the World cup.

Aubamayang who arrived the Emirates stadium during the January transfer, provided an astonishing 10 goals and 4 assist in his 12 league appearance for the North London club. The Gabonese attacker prior to his arrival, had 13 Bundesliga goals for former employers Dortmund.

Arsenal legends and correspondents, seems to have back both players to excel with Pires recently given his opinion on the Frenchman. The Arsenal legend believes that the Frenchman could revive his international career, if he performs in the current season. When asked what to expect from Lacazette, Pires told bwin that the former Lyon footballer remains a key player who can guarantee 15-20 goals in a season if managed well.

Aubamayang seems not to be getting responses from the media at the moment, but the 29yr old Gabonese international is expected to hit double figure in the current season. The attacker who has always hit double figures dating back to his days at the Signa Iduna Park, is expected to take the Premier league by storm when the league resumes.

Why the footballers are banked to deliver huge goal tally for the North London club, their output still depends on Unai Emery’s decision. The former PSG boss who joined the club earlier in the summer, is expected to deploy his favoured 4-3-3 formation. While the manager relies on his philosophy, the big question remains whether he will be able to get the best out of the attacking duo.