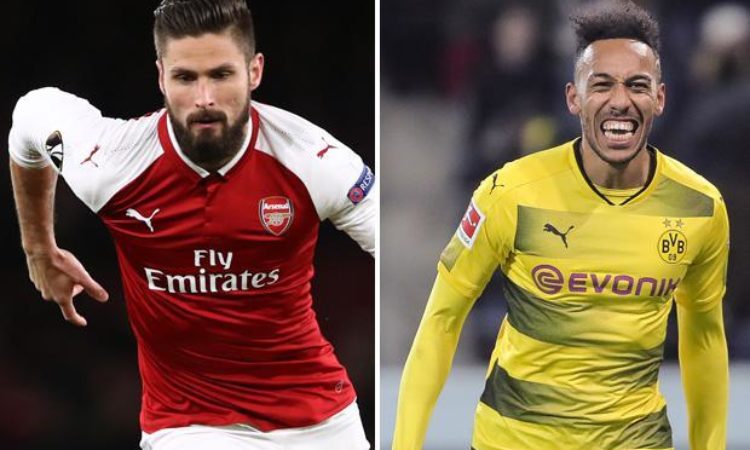 The January transfer window comes to an end after the midnight of Tuesday with fate of three Centre forwards (Aubamayang, Batshauyi and Giroud) hanging on a thread with uncertainty in their clubs. Olivier Giroud have dropped from the pecking order since the arrival of fellow countryman Lacazette from Lyon last summer with the 31-year old struggling for game time. Giroud is reported to be seeking
for a move away from the Emirates to rebuild himself and possibly boost his chances of making French list ahead of the world cup in Russia.

Batshuayi has been subject to criticism throughout the season for his inability to raise his game with Belgian’s failure to impress when given a start which had led to a lack of faith in him by the manager with club currently searching for a quality backup Centre forward. Aubamayang have subject to a big money move to the Emirates after exhibiting consistency in Dortmund for the past season. Arsenal reported sold Alexis Sanchez to rivals Manchester united earlier in the week will be looking to secure the services of the Gabonese attacker as possible replacement for the Chilean with transfer deadline approaching.

Chelsea football have entered the transfer market in a search for quality backup Centre forward for Alvaro Morata who is yet to score this year with the London club linked with Andy Caroll ,
Peter Crouch, Ashley Barnes,Slimani in recent weeks and most Importantly Edin Dzeko who is yet to pen his future with the Blues over wage bills. The London Outfit have shifted attention
to their neighbors as the have been linked with unsettled

Olivier Giroud in recent days. Conte in his post-match conference after the 3-0 win over Newcastle confirmed the acquisition of another Centre forward. Batshuayi could be force to join Dortmund on loan in bid to acquire playtime to break into the Belgium squad for the World cup. The Belgian’s move to Dortmund will allow the German club to sell their striker to arsenal part of the reasons have been due to the lack of replacement for the Centre forward. This move could allow a possible departure for Giroud from arsenal to a Chelsea as Frenchman would only be allowed to leave the Emirates if a possible replacement have been acquired. The Transfer will be a win-win for both Clubs and Players as the look to make critical career decision as the transfer window start coming to an end.