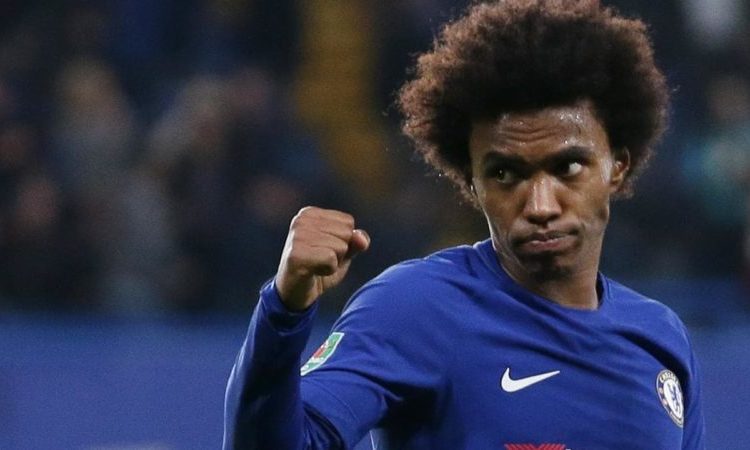 Chelsea after seeing their  playmaker Eden Hazard depart to Real Madrid,  the blues look set to lose Willian to La Liga rivals Barcelona. Barcelona interest in Willian shows no sign of waning, as the Spanish club according to Sky sports on Friday reportedly makes its third bid for the Chelsea player.

The Chelsea attacker who also features in Jose Mourinho’s wish list, have been subject to £55 million bid from the Catalonia football outfit. The Brazilian according to theSun has declared his intention to ply his trade away from the London based club, despite the appeal from new boss Maurizio Sarri. Sky sports reported that negotiation are currently active between the two clubs and the player representative.

Willian’s decision according to recent reports from Spain, have been linked with his discussion with countrymen Neymer, Coutinho and Paulinho in the just concluded World cup tournament in Russia.

The 29yr old blew hot and cold for the Brazil national team with Kwese.espn.com reporting on his pace as the most visible factor, he also showed willingness to defensive duties, helping the team to recover the ball when not in possession.

Willian’s age makes the big money move a bit of a surprise considering that the player will be clocking 30 by August. The presence of Philippe Coutinho and Ousman Dembele in the club, also present uncertainty for the Brazilian but it’s believed that his experience and quality will be key for the Spanish club.

The Chelsea attacker in the event of any deal, will have to wait for the Spanish club to free up a spot for another player without an E.U passport. This is because the Spanish league gives room for only 3 non-holders with Coutinho, Paulinho and Yerry Mina current occupying the positions.