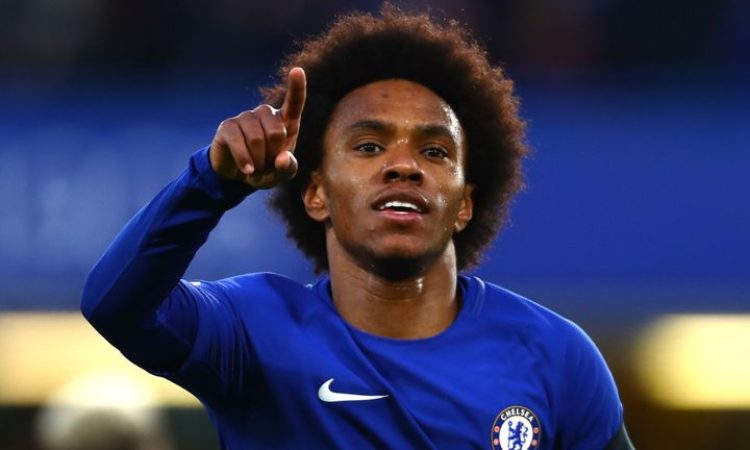 Barcelona ready to sacrifice player plus cash to sign Willian

The Camp Nou side have been trying to snap Willian from Chelsea of which they have reportedly submitted an offer which Chelsea have turned down. The current reports emanating from Spain has it that Barcelona are ready to do a player plus cash swap deal.

The Chelsea ace contributed much last season that saw him score 13 goals with 12 assists in 55 appearances, helping Chelsea in winning the FA cup after an impressive campaign for him.

Despite his personal contribution, it wasn’t enough to qualify the Blues for Champions League, even after winning the FA cup.

The 29-year-old Brazilian have not been consistent under Antonio Conte because of the Italian harsh treatment of playing him mostly as a substitute.

However, Barcelona are said to be keen in signing Willian despite being turned down in their initial offer, and according to Mundo Deportive, Barcelona are ready to do swap deal plush cash with either Andre Gomes, Rafinha or Paulinho after it emerged that Chelsea are demanding a whooping sum of  €80m for their player.

It’s quite surprising how crazy transfer market has been recently, however, he will bring much needed attacking force , pace with his movement and direct running, causing defenders much problem to contain in an already forward packed squad at the Nou Camp, with the likes of Lionel Messi, Luis Suarez, Ousmane Dembele and his fellow country man Philippe Coutinho.

Nevertheless, Willian isn’t a debate when it comes to what he can deliver, if Barcelona are ready  to sacrifice player with cash for the 29-year-old Brazilian, then it worth the bargain.

Meanwhile, both Gomes and Rafinha have not lived up to expectation since joining the Spanish giants, and has failed to earn themselves a starting birth, and it will be seen as a shock if Paulinho turns out to be the escape goat after helping Barcelona win the Spanish La Liga following his move from Guangzhou Evergrand last year.

However, it remains to be seen if Barcelona will land their primary target before or after the world cup in a player plus cash deal in order to reduce the cost for his signature. As Ernesto Valverde is keen to build a team capable of challenging in all fronts especially in the Champions League.