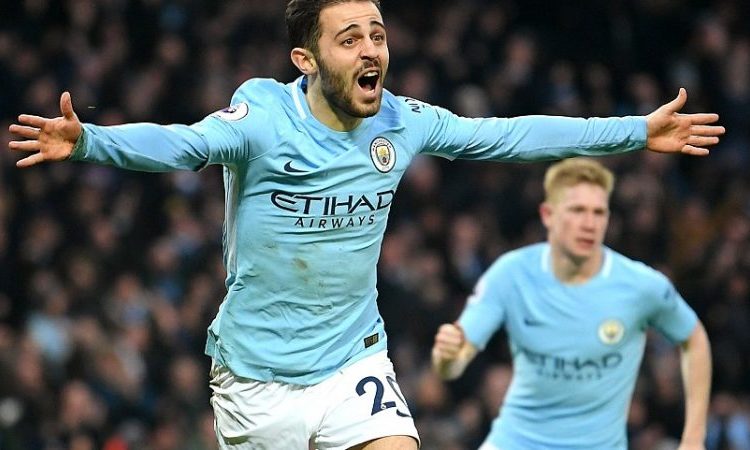 March 4, 20180
Manchester City stepped one foot closer to the title as bernado Silva’s second half goal was enough to grab all three points from Chelsea. Chelsea came to ethihad stadium hoping for revival after last week defeat at Old Trafford but the London side were unlucky to leave Etihad without a point.
Antonio Conte reverted to his attacking trio of Pedro, Hazard and Willian while pairing Fabregas and Drinkwater at the middle of the park with the remaining players keeping their slot. Guardiola made 2 changes to the side that won Arsenal during the Mid-week as Laporte and Zinchenko started today. The game began in a bright manner for Manchester City as the host immediately restored their dominance on Chelsea who seemed to have reverted to negative football coming into this one. Leroy Sane almost scored a goal but Azpilicueta was able to clear from the lines.
The Manchester club continued to dominate proceeding though with No goal to confirm it while defensive minded Chelsea struggle to get forward as they had no attempt on goal for the first interval. Antonio Conte would have been the happier manager going into his dressing room during the break but City finally scored after the break. Bernado Silva gave the home team the lead barely a minute after the break after series of woeful defending involving Christensen and Marcos Alonso. Dilemma strucked on the Chelsea side after the goal but the decided to rely on the manager’s tactics and it almost paid when the hit a counter but Moses effort was wayward. This was Chelsea first attempt as the Blues’s attack was as blunt as ever due to lack of communication between the attackers and the midfielders was seen vividly during the course of the game.
Antonio Conte made series of changes late in the game with the introduction of Giroud, Emerson and Morata but the blues could only muster a stoppage time Volley from Marcos Alonso.
Chelsea remains 5th with 4 points separating the London outfit and 4th placed Tottenham hotspur.
Post Views: 481
Bernado SilvaTrending Man City Beat Toothless Chelsea 1-0