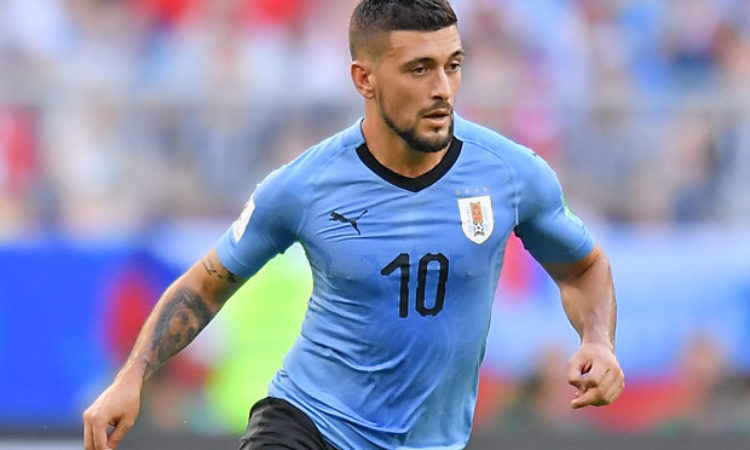 News according to the Sun has it that Premier League side Newcastle and Celtic are set to clash over the transfer signing of Uruguayan and Cruzeiro’s playmaker Giorgian De Arrascaeta.

Celtic manager Brendan Rodgers had reportedly sent scouts to monitor his performances in the Copa Libertadores, and recently have been linked with a move for Giorgian who is rated at £18 million, he featured twice for Uruguay at the World cup after playing 59 minutes of Uruguay’s 1-0 win over Egypt before coming on as a 63rd-minute substitute against Russia.

However, according to the Sun, his impressive performances both at the club and International level have attracted Celtic and Newcastle to hunt for his services.

Newcastle manager Rafa Benitez has identified the No. 10 role as his priority target this summer and according to the news he is ready to cough out a total of £16m to try price out the player.

The Sun also reported that De Arrascaeta has made it open to joining any European club after almost spending his career in South American clubs with the likes of Defensor Sporting and Crezeiro.

He has however scored a total of 20 goals in 90 appearances for Current club Cruzeiro.

Nevertheless, according to the Cruzeiro president Hernan Barcos, who claims they have not received any bid yet for the playmaker and also had promised him never to block his move as far as their valuation is met.

Hernan said, (We go on a back and forth wave, that is, if there is a great opportunity that interests Arrascaeta and that is good for Cruzeiro, we would attend. We can not go against the will of man. But, under present circumstances, he wants to continue on Cruzeiro. Of course there is a lot of speculation as to this, as he is a great player and any club wants to have him on his team. But so far there is nothing, just speculation).

It’s left to be seen who amongst Celtic and Newcastle will win the players signature.