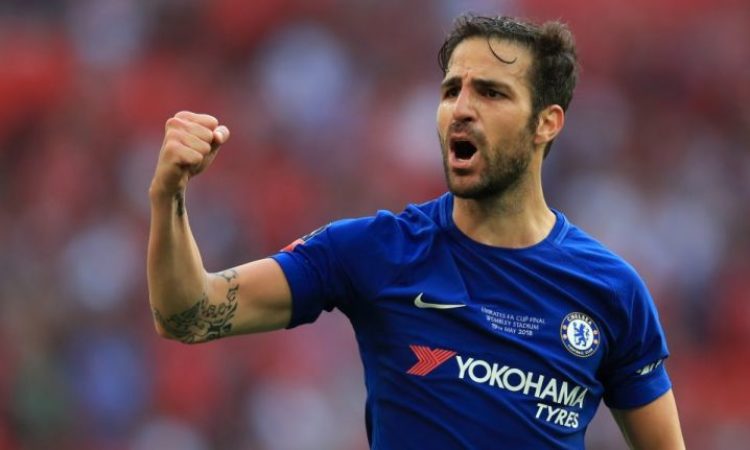 The Spanish midfielder Cesc Fabregas, was caught ‘liking’ a tweet where group of fans were celebrating Antonio Conte’s sack from Chelsea.

The Cheslea manager has finally shown the exit door on Thursday after months of speculations, as former Napoli manager Maurizio Sari will take over and replace his country man in the Blues hot seat. And according to news that Chelsea have signed both Sarri and Napoli midfielder Jorginho this week and that they will be unveiled in few days time.

Meanwhile, Chelsea’s Brazilian winger Willian had a dig at Antonio Conte following Chelsea’ FA Cup victory over Manchester United on instagram, and it appeared that Cesc Fabregas thrown his own shots on the departed manager.

Fabregas nearly lefty Chelsea in Antonio Conte’s first season as he often played the Spanish midfielder mostly as a substitute, and the player now looks happy as a new manager is about to be introduced. Cesc Fabregas ‘liked’ a tweet which reads: ‘Yessssssssss Conte gonnnnnnnnnnnnnnnnnnn’, and it has been seen all over the social media.

The Spanish midfielder explained that he partly blamed Conte for not making the Spanish World Cup team in Russia. Fabregas said, (When Conte first game to Chelsea I wasn’t playing at all, He Julen Lopetegui wanted to try to give opportunities to the younger players who he worked with at the Under-21s and Under-19s. Fair play to him, they have done well, they have been playing well for two years. They qualified in style and they deserved their opportunity as well. I just have to wait and keep working).

The 31-year-old has spoken against Antonio Conte’s defensive formation after Chelsea’s defeat to Barcelona in February. Fabregas hinted, (To spend 90 minutes there defending can be a long 90 minutes. It can be an eternity, you have to go there to attack we have to feel we can hurt them. Defending for 90 minutes is a suicide mission we have to have personality and play our game).

However, news has it that despite Fabregas, who was noticed celebrating, there have been other Chelsea players who were excited on hearing the news.