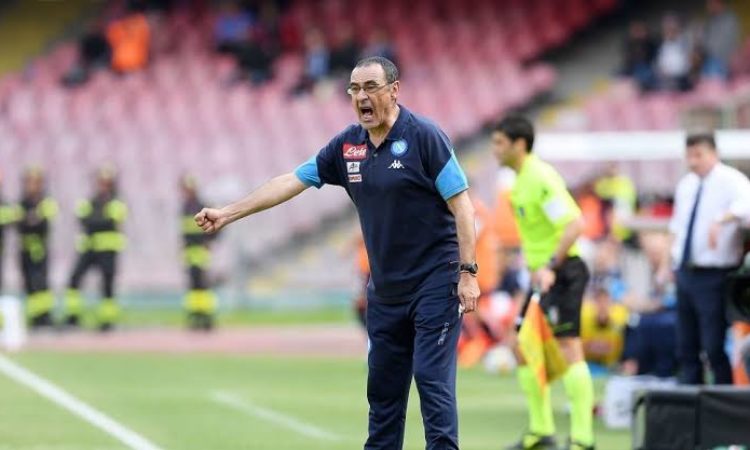 Premier League giants, Chelsea have been handed a boost in their pursuit of a new manager as it is reported that Napoli president, Aurelio de Laurentis is ready to drop the release clause of Maurizio Sarri to £4.5m in a bid to encourage Chelsea making a move for the man. The Naples-based outfit have already appointed Carlo Ancelotti but face the prospect of paying Sarri for two more years if a club doesn’t pay his release clause of £7m.

Sarri is top of Chelsea’s wishlist to replace Antonio Conte, with the former Juventus man set to be relieved of his position as Blues manager. Sarri’s £7m buyout clause expired on May 31, with Napoli left with the prospect of paying him for the duration of his contract (2 years) after moves to Borussia Dortmund, Zenit St. Petersburg and Real Madrid fell through. The maverick Italian tactician is wanted by embattled Chelsea owner, Roman Abramovich who has been impressed with the attacking style the former banker employs with his team’s.

Current boss, Antonio Conte will also command a compensation fee of around £9m should he be fired, with the power brokers at Stamford Bridge having burnt bridges with the 48-year-old, who constantly moaned about the club’s lack of foresight in the transfer market. Former France and PSG boss, Laurent Blanc remains a fallback option should any move for Sarri go south, though it is believed that the deal will still go through.

Last season, he led Napoli to a second-place finish in the Serie A having led for most of the campaign only to lose the lead at the top of the table just weeks before the end of the season.