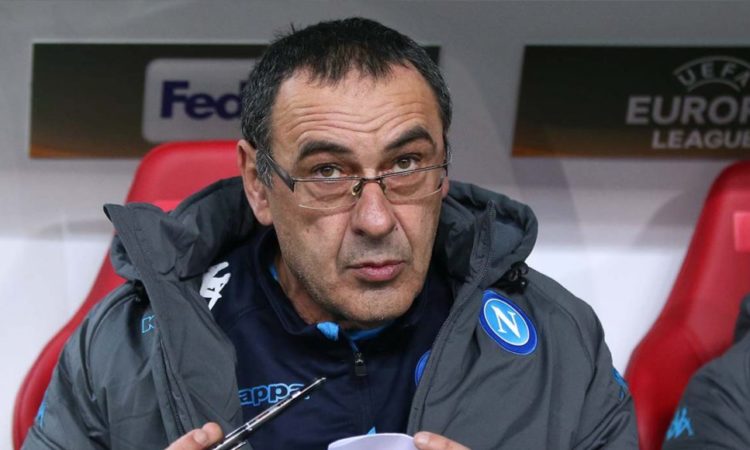 According to news from Stamford Bridge that Chelsea has appointed former Napoli manager Maurizio Sarri as their new head coach on a three-year contract. The Italian gaffer has replaced his fellow country man Antonio Conte who was relieved of his duty yesterday.

The 59-year-old manager helped his former side to a second place last season after spending three years with the Naples and was named coach of the year in 2017 after impressing the Serie A in his second season in charge.

After signing the dotted lines, Sarri said (I am very happy to be coming to Chelsea and the Premier League. It is an exciting new period in my career. I look forward to starting work and meeting the players on Monday ahead of travelling to Australia, where I will be able to get to know the squad and begin our match action, I hope we can provide some entertaining football for our fans, and that we will be competing for trophies at the end of the season, which is what this club deserves).

While Chelsea club Director Marina Granovskaia added (We are delighted to welcome Maurizio and are looking forward to him bringing his football philosophy to Chelsea. Maurizio’s Napoli side played some of the most exciting football in Europe, impressing with their attacking approach and dynamism, and his coaching methods significantly improved the players at his disposal. He has plenty of experience in Serie A and the Champions League and we know he is relishing the chance to work in the Premier League).

Antonio Conte’s future was finally settled after been dragged on for weeks and despite the 48-year-old taking over the pre-season training earlier this week.

The former Juventus manager has a year remaining on his contract, but was dismissed just few months after clinching the FA Cup trophy in his second season in charge.

He lifted the Premier league in his debut season with Chelsea in 2016/2017 season, winning a total of 30 games with a 13 straight winning streak, thereby breaking the club’s highest straight win in their history.

But however, he led them to a fifth league finish last season, missing out on the Champions League, and with his relationship with Chelsea board said to have soured concerning his vocal comments over transfers.

Maurizio Sarri has become Chelsea’s 13th permanent manager ever since Roman Abramovich took over in June 2003. And his first game in charge will be in the friendly with Perth Glory on 23 July. Chelsea fans are relaxed and excited to watch how things go but many believe Sarri will deliver with his style of beautiful football.