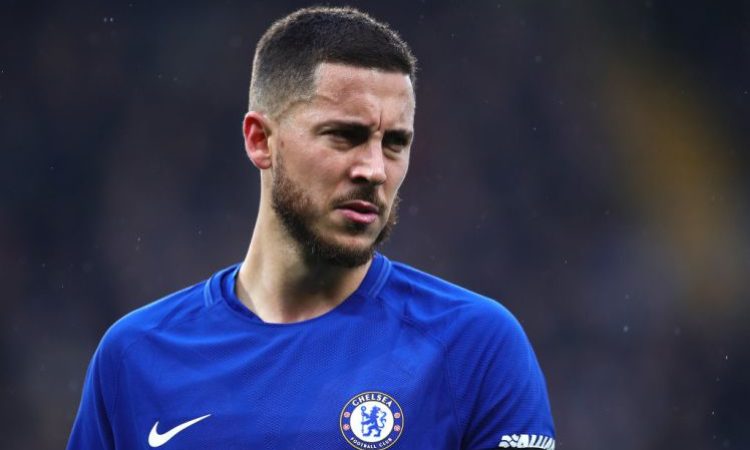 The Blues are said to reject any bid from Real Madrid and Barcelona for Eden Hazard and are said to believe the Belgium winger will stay put with the Stamford Bridge side.

Meanwhile, report has it that Chelsea will allow Thibaut Courtois to return back to the Spanish capital following his comments that he worth more than the £200,000-a-week contract on the table.

While Eden Hazard has put his Chelsea future in doubt by revealing that he would consider quitting Chelsea and will be heading to Madrid this summer following his impressive performance at the World Cup.

Chelsea on the other hand has placed a whooping sum of £200 million on Eden Hazard, it’s yet to be seen if Madrid can match that kind of amount, which is almost what Paris Saint Germain paid to Barcelona for Neymar.

The London club have till August 9 to try and persuade Eden Hazard into extending his contract with them as they start the new Premier League season.

With the Blues determination in keeping the Belgium skipper, it’s left for the player to make decision either by submitting a transfer request or stay and honour his remaining two years contract. As Chelsea are said to willing to offer him a pay rise of over £300,000-a-week to remain with the Stamford Bridge club, discussions have been going on and will resume afresh in the next few days.

However, Real Madrid will try there possible best to lure Hazard to the Spanish capital, they will also make huge success if they snap Thibaut Courtois as Chelsea looks for his replacement in Roma Brazilian Alisson Becker. The Belgium goal keeper has just this season to become a free agent, although he is yet to sign the £200,000-a-week contract Chelsea offered him since December last year of which they believed he would have signed.

When quizzed about his Stamford Bridge future, Courtois said, “I will go back and I will see what they want and how they say it. Obviously, with this World Cup, I think what was on the table is different than what I can have. In this World Cup, I have ignored all the speculation, all the rumours. But now, in the next few days, I will have a chat with my agent and see what Chelsea told him, and then we will talk. But I feel happy at Chelsea, it’s not that I necessarily want to leave”.

The Chelsea number also revealed the possibility of overseeing his remaining one year contract which will see him leave as free agent next summer, which he said “People always complain that players don’t comply with their contracts, but maybe they do. I don’t think they will keep someone with my qualities on the bench, even if I don’t sign a new contract. But maybe staying is possible, because I like it in London”.

The Blues axed Antonio Conte and appointed former Napoli manager Maurizio Sarri as his replacement last weekend and Courtois said the change has been anticipated but won’t be that easy to cope with new manager just few weeks to the new season.

He said “The decision to sack Conte was made a few days ago, but I think as a group we expected that to happen earlier because we heard what the board said to us already after the season and then it took until now. I don’t think it’s easy for a new manager to come in and shape us in a few weeks. I think fans need to understand we will need some time to adapt to the new manager and a different style”.

He also claimed that he has proved his critics wrong following his impressive performances at the World cup and has been rated one of the best goal keepers in the Premier League along with England’s Jordan Pickford of Everton.

Courtois revealed, “I’m very happy with the team performance and I’m very happy with my own performance, I know this is my level, despite the people who called me a bad goalkeeper. I think I proved a lot of people wrong and I know this is my level. To call me the best in the world, I don’t know. Jordan Pickford made some good saves against Sweden and Colombia, and Hugo Lloris made against us a very good save, and also against Uruguay. I don’t think you can decide (who is the best) on the amount of saves, I think if you did, then I exceed everyone. But sometimes it’s just that one save that does it. The keepers I mentioned, Subasic as well, maybe all four were on a high level”.

However, it’s now left for Chelsea to decide on how they will handle this serious situation surrounding their star players.