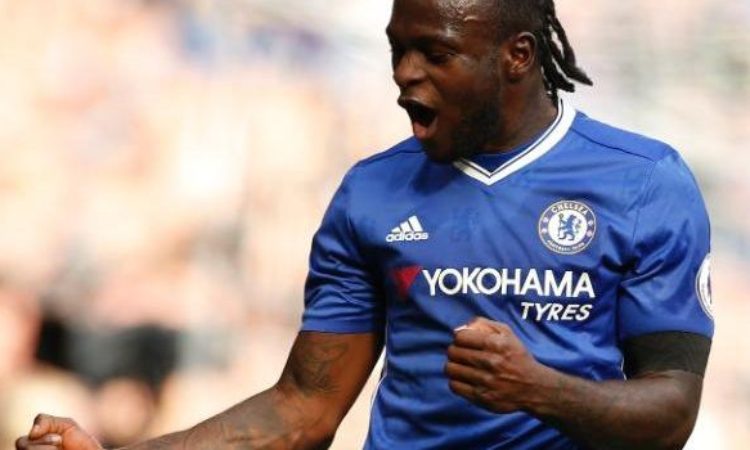 November 25, 20170
Ahead of the epic Super Saturday game vs Liverpool, it has been confirmed that Chelsea and Nigerian Winger cum wing back Victor Moses will be making his long awaited come back.  The Chelsea star will however, not be rushed into action by Italian gaffer Antonio Conte, who prefers to be careful when reintegrating returning players into the squad.
According to Conte Moses will be on the bench for the crunch clash at Liverpool on Saturday which is the first game he is set to feature in after been out for than a month out with a hamstring injury.
The last time Moses stepped out in famous blue for the Londoners was in last month’s shock defeat at Crystal Palace. He lasted barely 39 minutes before he was forced off the pitch by a strain in his hamstring.
In Moses absence, Conte has used Davide Zappacosta and Cesar Azpilicueta on the right wing-back role which the Nigerian International has made his own since last season’s title run.
But after revealing earlier this week that he hoped Moses would be available against Liverpool, Conte told a news conference: “His condition is good.
“He needs a bit of time to recover the best form, but tomorrow he is in our squad. I want to bring him on the bench and then to decide if there is the necessity to put him in [the team] or not.
“I am very happy because now he is fine, but he needs a bit of time to find the best physical condition.”
Prior to his injury Moses had been in a fine run of form leading his country to the World Cup Mundial in Russia. The wing back had supplied the killer pass from which Arsenal’s Nigerian forward Akex Iwobi tapped in to win the game against Zambia sealing the passage of the Super Eagles of Nigeria to the World Cup finals in 2018.
He had played eight for Chelsea this season scoring his only goal in the community shield play off versus Arsenal which Chelsea ultimately lost on penalties. The Nigerian star’s presence has been sorely missed, with Chelsea (who are third on the Premier league table nine points behind pace setters Manchester City) having to do without the width, penetration and defensive nous which he offers. That the injury conincided with the absence of some Chelsea’s key personnel like the enigmatic N’golo Kante is perhaps the single reason why the Blues are no closer to City at the moment. Fans will be hoping he gets on the pitch sooner than later.
Post Views: 702
victor Moses breaking news victor Moses trending news