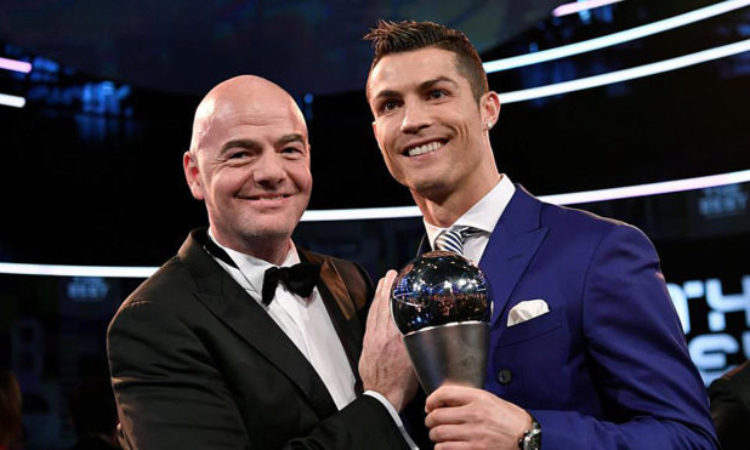 Infantino who was in attendance in the La Liga fixture drawer on Tuesday told Cadena Ser’s “El Larguero” media station that the Spanish league’s dominance on the continental stage could collapse without the Portuguese talisman. He also backed Madrid boss Julen Lopetegui to excel with the los blancos considering the quality of players.

“Cristiano is a ‘crack’, one of those players who make us dream,” Infantino said. “That he is not playing in Spain any more means that Spanish football will have to look for someone to replace him. But I am convinced that Madrid have great players, champions. “A team that loses Cristiano Ronaldo is weaker than a team with Ronaldo, but those white shirts have a phenomenal force. Madrid still have a spectacular team and a very strong coach in Lopetegui, so I believe this will be another good year for Real Madrid.”

Ronaldo’s departure to Juventus for €100m earlier in the month seems to have placed the Madrid side in dilemma as the club is yet to replace the attacker. Madrid President Fiorentino Perez saw potential target Neymer and Kylian Mbappe commit their future to their respective clubs last week. The club which been in deal with Chelsea and Inter for Hazard and Icardi respectively seems to have hit a dead end as agreement is yet to be reached.

The question becomes how the Madrid club who seems to have rode on the player’s factor and goal scoring ability will cope. The club will now switch attention to arrival of Eden Hazard and hope that Gareth Bale stands up to the challenge.