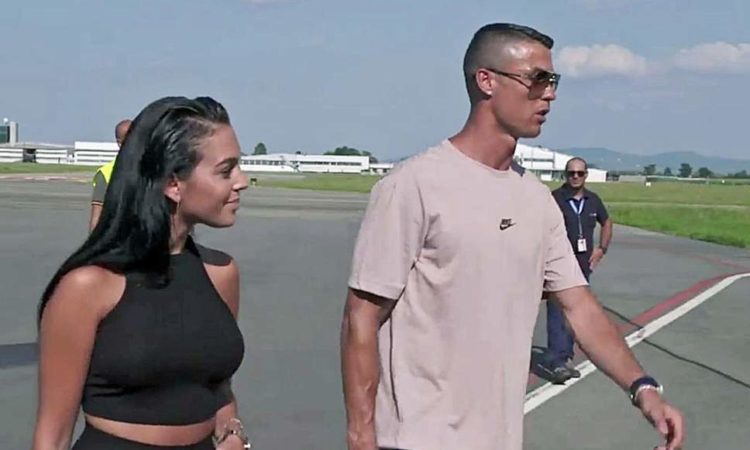 Cristiano Ronaldo in Turin ahead of his Juventus medicals

According to reports from the Serie A champions that the five time Ballon D’Or winner Cristiano Ronaldo, has arrived  in Turin ahead of his formal presentation as Juve player on Monday afternoon, 16th July, Juventus wrote on their Twitter account with an image of Ronaldo and his girl friend Georgina Rodriguez (Now arriving in Turin), they were caught in front of the private jet that landed at Turin’s Caselle airport, Italy.

The Old Lady club posted a video of Ronaldo dropping down from the plane with his entourage before being escorted by Juventus officials into a tinted black car. The Portuguese superstar had been tipped to be in Turin for medicals on Monday following his shock decision for opting leaving in a total of 100 million-euro ($116 million) move from the Spanish giants Real Madrid. He is expected to be welcomed at the airport by as many as 20,000 supporters, according to daily Repubblica.

Ronaldo who has won four Champions league trophies in last five seasons, will report to the Allianz Stadium for medicals today before facing the media at 4:30pm local time. After that, the Portuguese ace will put pen to paper on a four-year deal worth in the region of 30 million euros per season, the deal is set to cost the Italian giants a total of 350 million euros. The report has it that he will be greeted with his teammates this afternoon at their pre-season training base and will later join them after his time lay off at the United States later this month.

The Serie A Champions believes Cristiano Ronaldo arrival will enhance their pursuit on the European Champions League. After winning the scudetto for the 6 straight years and four domestic doubles, Juventus has seen struggled in winning the European most coveted trophy. The Old Lady haven’t won the competition since 1996 but reached the final in 2015 and 2017, where they were outs by Barcelona and Ronaldo’s former club Real Madrid accordingly.

However, Cristiano Ronaldo has scored a total of 120 Champions League goals, more than anyone else in the history of the competition, and has won four out of the last five in the competition with Real Madrid. The former Manchester United player scored 2 goals in Turin against Juventus in the first leg of their quarter finals with Real winning 3-0 last season.

Meanwhile according to Juventus midfielder Claudio Maechisio who said, “I say this as a fan, Cristiano Ronaldo is an incredible signing”

Also according to Analysts Banca IMI claims that “Juventus will benefit from increased ticket sales, which we estimate at an additional 5-7 million euros per season, and in general all brand-related activities, such as merchandising, marketing and sponsorship on a scale that is difficult to estimate”.

It’s now boils down to next season, how Ronaldo will be utilized by his new boss.