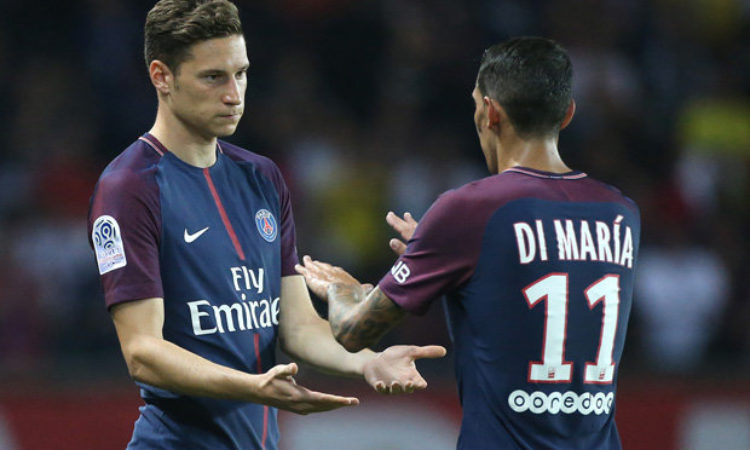 March 3, 20180
Angel Di Maria and Julian Draxler both featured in the 3-0 mid-week French cup triumph over Olympic Marseile with the Argentine bagging a brace while his German teammate having 2 assists. The 2 could still be in the spotlight on Tuesday when the French club host Real Madrid in the reverse fixture of the knockout stage of the Uefa Champions league.
PSG have already confirmed that Neymer will absent for the game adding that the Brazilian could be on the sidelines for at least 6 weeks while other sources have added that the Brazilian could stay on the sideline for a long period of 3 months. Mbappe was replaced by Pastore during the break in their mid-week cup match against Marseille as the French football was suspected to have ankle injury though Unai Emery is hoping that it’s not serious. . “Mbappe received a knock on the ankle and asked not to play the second half but I hope that it is not very serious,” said Emery who is sweating on the fitness of the Frenchman ahead of the crunch game against Madrid.
In the possible absence of the Frenchman and his fellow Brazilian teammate, The Onus might yet fall on a pair of Di Maria and Draxler. Angel Di Maria has been a consist performer for the club in recent years but the Argentine was surprise to lose his starting lineup position to summer signing Mbappe and will be gifted a chance to prove himself when his previous employer visits the French capital. Julian Draxler is presented with another opportunity to reinvent himself as a talent in the big stage as well as convince Jochiam Low for a world cup berth.
The two players have proved to be versatile in the course of their football careers and this will count against Madrid. The Argentine have been deployed to the play in the left hand-side of the mid-field during his time in the Spanish capital as he helped Real Madrid to lift the la Decima. Di Maria have also proven to be creative and adaptive as he has been able to switch from counter-attacking to Possession sides without losing his quality as a player. Julian Draxler have also been able to experiment different positions as a football judging back to his days at Schalke and Wolfburg. The German attacker have also shown excellent adaptive skills as he has previous flourished in a False 9 role during his days in German and was almost touted to join arsenal before the arrival of Lacazette.
The presence of the two players could prolong Unai Emery with a lot of alternatives as both players have the capacity to drop deep when out of possession also to initiate counter. Their adaptive skills makes the switch of formation in game possible as both can function in a 4-3-3, 4-2-3-1 and 4-4-2 formation. The might not be sharp as Neymer/Mbappe combination but the might be the right mix for the French club.
Post Views: 460
Angel Di Maria Trending News Di Maria and Julian Draxler Julian Draxler Trending News