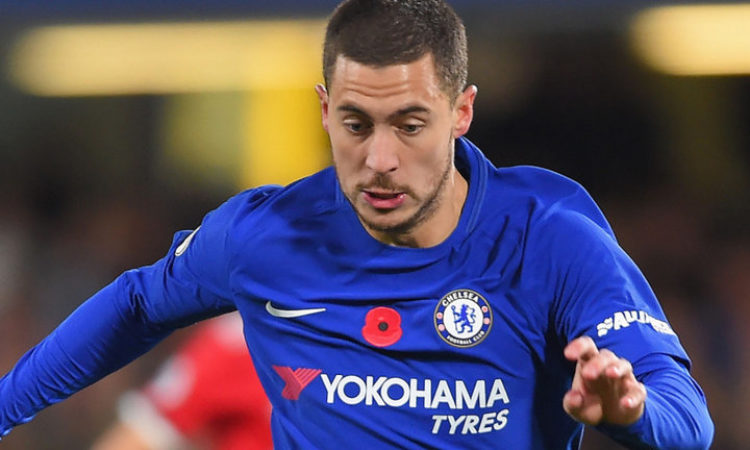 Eden Hazard Makes a Bold Statement Ahead of Barcelona tie

February 23, 20180
Chelsea Playmaker Eden Hazard have admitted that his best can be achieved only when field in his natural position at the left-hand side of the wing though confirmed he will carry out any task assigned to him by Antonio Conte.
Eden Hazard have been used as a make shift Centre-forward this season and most Importantly in the last month games as Conte have tried to explore more alternative to his team’s lack of Fire-power. The Italian’s element of surprise came on Tuesday night when he decided to deploy Hazard in the false 9 position in favor of his 2 Centre-forwards  Hazard replied reporters after helping Chelsea to a 1-1 draw with Barcelona in the first leg of their Champions League last-16 encounter: “To be honest, I like the role as a false nine.
“But in games like that against quality opposition like Barcelona, it’s difficult. You are starved of balls. I might have touched 25 balls that night and 15 of them were flying toward my head. “That is not really playing to my qualities. I won some aerial duels against Gerard Pique, and that’s not bad.
“But if I had to choose, I prefer to play like I did in the last 10 minutes, which was out wide. But it’s the manager who has the final word.
“On the wing I feel more comfortable. That’s my place.”
The Belgian however admitted that the result was unfavorable for his side owing to the fact that the blues must attack and score at the Nou camp while keeping things tight at the back. He also rued the draw to the error and inability of his side to get the crucial second goal to kill off the tie. “In games like that you have to be 100 per cent focused. One error, one goal,” Hazard added after witnessing the brilliance of Andres Iniesta and Lionel Messi after Andre Christensen gifted the pair the chance. The Belgian however concluded that the only way to qualify now is to have a positive mindset and go for an attack in the reverse fixture while saying that defence is a risky option.
Post Views: 589
Eden Hazard Statement Ahead of Barcelona tie Eden Hazard Trending news