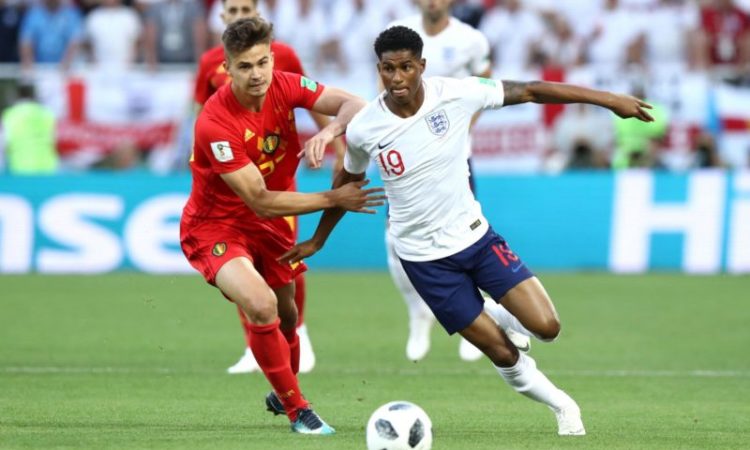 Gareth Southgate, the England coach made eight changes from the one that won against Panama, while Belgium coach Roberto Martinez also made nine changes, a victory wasn’t the two coaches priority since they have all qualified after winning their first two matches, but probably to show who comes out on top as the knockout stages looms.

It was to say it’s just an ordinary encounter between the two nations, barely nothing to fight in a dull encounter in Kalinningrad of which Januzaj’s 51st minutes goal separated the two, as the former United curled a left-foot at the top corner past the England goalkeeper Jordan Pickford.

The English side who their top striker and skipper Harry Kane’s absent barely created any chance, but although Marcus Rashford was denied his equalizer with Belgium number one Thibaut Courtois touching effort saved the ball wide.

Gareth Southgate team’s lost to Belgium happens to be the first international loss after 17 matches, and this will lead them to face a difficult Colombian side in Moscow on Tuesday evening, while the Red Devils of Belgium face Japan on Monday.

Before the start of this encounter between England and Belgium, the debate is on who tops the group after the two teams are on the same level of points, goal against and goal for, the only difference was the number of booking against them, they also knew that who so ever comes second might ply an easier rout to the quarter finals.

Geyying the maximum points was not the case as both teams rested their top players of which the result at the first half showed the difference of lesser class as it ended in 0-0.

If England defeats a Colombian side led by Radamel Falcao in round 16, then there is the possibility of facing either Switzerland or Sweden at the quarter final.

Unless England emerge victorious against Colombia, then Gareth Southgate’s experiment for not fielding his best players will pay off, because the South American side are not an easy push over.