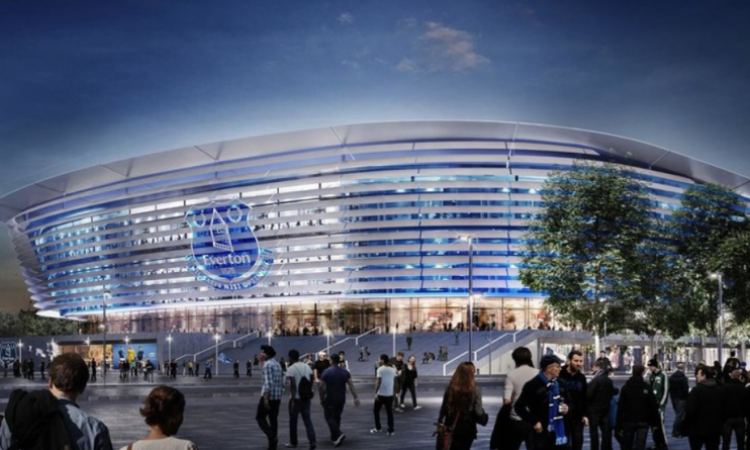 Everton gets land for new stadium

November 23, 20170
Preparations for the construction of the proposed Everton’s new home ground is entering its final phase as it can be confirmed that the club have put pen to paper on  an agreement to lease land on Bramley Moore Dock.
With this done the road is all set for work to begin on the 50,000-capacity stadium which when erected on the site will  replace Goodison Park – the club’s home since 1892. The final hurdle to be crossed before actual work can commence is for Everton to secure funding and gain planning permission to build the stadium.
The Blues have secured a 200-year lease on the proposed site of the new stadium – effectively handing control of the land to the Premier League club.
Everton confirmed the agreement in a statement on Thursday, which read: “Everton Stadium Development Limited (a wholly-owned subsidiary of Everton Football Club) and Peel Land and Property (Ports) Limited have formally signed an agreement for the Club to lease land at Bramley Moore Dock, Liverpool Waters.
“The lease, which is conditional upon gaining planning consent for the proposed new stadium and securing funding for its construction, will run for a period of 200 years at a peppercorn rent.
“The signing of the agreement is a significant milestone in the project and means Everton effectively now controls the land upon which a new stadium would be built. This follows several years of searching for a new site and is the culmination of an exhaustive search across the city.”
Everton chief executive Robert Elstone confirmed the club would look to secure planning permission on the stadium after New Year.
Elstone said: “Clearly, this is very positive news. Gaining control of the site was essential for us to be able to move forward with the next stages of the project – finalising the funding agreement with the Council and preparing for the submission of a planning application – both of which we hope to do in the new year.
“I’d like to thank Peel as well as Mayor Anderson and his colleagues at the Council for their support in getting us to this point.”
The proposed stadium which is set to replace Goodison Park – Everton’s home since 1892.
Bramley Moore Dock has long been the preferred option of the club and will form part of a £5bn Liverpool Waters scheme subject to planning consent.
Ian Pollitt, assistant project director at Liverpool Waters, added: “We know that a world-class stadium, on the banks of the River Mersey, will act as a trigger for even more investment and jobs which will be of huge benefit to the whole city region.
“We’ve been working very closely with all partners to get to this stage and we’re excited to move on to the next phase of the project.”
Post Views: 1,243
EPL Trending news everton trending news