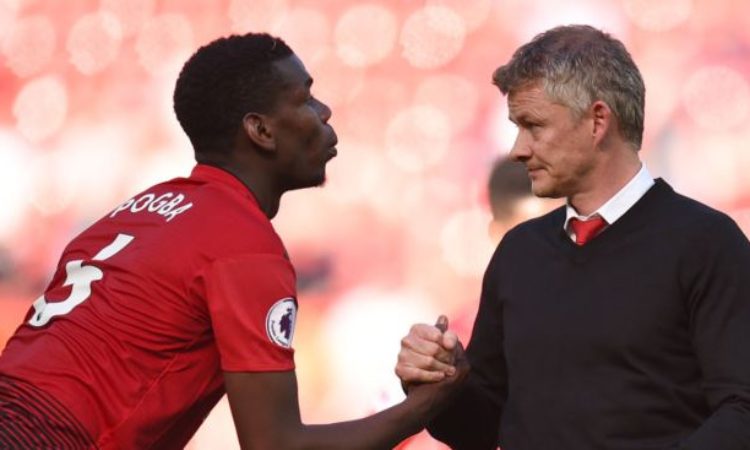 Will Not Scatter United’s Dressing Room This Season-Pogba

Paul Pogba has given Manchester United assurances that he will NOT split the dressing room this season.

The United star has told United boss Ole Gunnar Solskjaer that he will be fully committed after a summer of transfer turmoil.

And the United boss knows Pogba is a serious candidate to captain the team whenever experienced club skipper Ashley Young is absent.

Solskjaer held a series of frank and honest talks with the Frenchman during pre-season.

The United boss was worried that Pogba could become a negative force at Old Trafford after United refused to sell him to Real Madrid or Juventus.

But the World Cup winner told his manager that despite opening the door on a move to the Bernabau at the start of the summer by admitting he needed a new challenge, he respects United’s refusal to sell him.

A United source described the 26-year-old as “a world-class midfielder with an attitude and approach during pre-season that has been superb.” Read More

‘4 Mistakes, We Have To Be Grown Up’ – Lampard Admits Man Utd Are More Clinical

Chelsea boss Frank Lampard believes his side were desperately unlucky to find themselves on the wrong end of a 4-0 thrashing against Manchester United.

The Blues played well in spells at Old Trafford but the home side were clinical when it mattered, Marcus Rashford netting twice with Anthony Martial and Daniel James also getting on the score-sheet.

And Lampard believes the scoreline was extremely harsh on his team.

‘Poor mistakes for the goal,’ he told Sky Sports following the match. ‘We controlled major parts of the first half. Probably poor decisions in the final third.

‘In the first half we should be in front. It’s a lot easier for them when they’re 3-0 up. This is a counter-attacking team. They have pace and if you turn over the ball, they will counter attack you. We were the ones on the ball. We have loads of lessons to learn. It was no way near a 4-0. Read more

A good start doesn’t mean a good finish of the season, and of course that’s right, Jose Mourinho warned Arsenal.

Jose Mourinho has warned Arsenal that a good start, will not necessarily mean a good end to their Premier League season.

“A good start doesn’t mean a good finish of the season, and of course that’s right.”

“It is the first one, the next one, in this case it’s the opening of the season and there is not a better thing.

“You finish off pre-season, it doesn’t matter if you have great results, then you go to the first match of the season and to get something out of it is very, very important for Arsenal in a match where they were not very, very good.

“The game was not especially good, but to get three points is very important.”

Mourinho’s future on target after victory

Jose Mourinho has hailed Harry Maguire after Manchester United’s £80m newcomer enjoyed a dream start in their 4-0 win over Chelsea.

​​​​​​On a day of debuts at Old Trafford on Sunday, three-time Premier League winner Mourinho made his first appearance as part of the Sky Sports team while Maguire, the world’s most expensive defender, marked his first outing for Manchester United with a man-of-the-match performance at the heart of their defence.

“He fully deserved the award, he was solid like a rock,” declared Mourinho.

Maguire made more interceptions, tackles and blocks than any other player on the pitch and Mourinho believes his presence could be a regular game-changer for his team-mates. Read more

Marcus Rashford of Manchester United has been voted the king of the match of match day one.

The English striker netted a brace in Manchester United 4 vs 0 win against Chelsea at Old Trafford on Sunday.

Anthony Martial and Daniel James were also on target as the Reds thrashed Frank Lampard side.