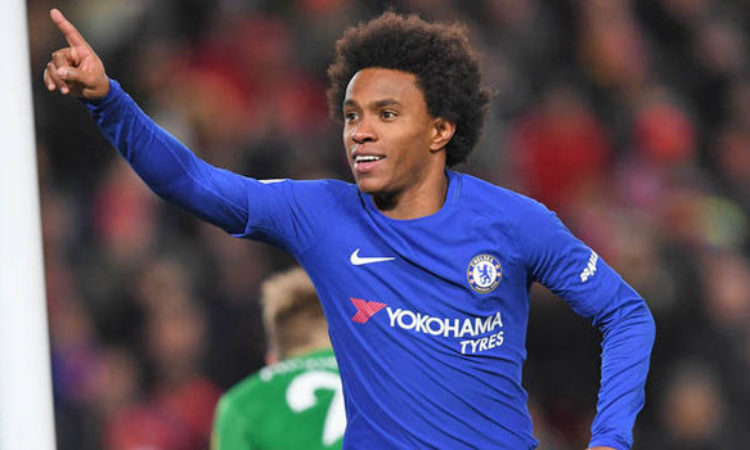 Jose Mourinho confident of signing Willian ahead of Barcelona

Jose Mourinho is said to have wanted to reunite with Willian last summer but is determined to get his man this time around after Brazil crashed out of the World Cup losing to Belgium. The Old Trafford side was seen last season snapped Nemanja Matic away from Chelsea and now the Red Devils are confident of completing a second signing from their Premier League rivals in the space of a year.

However, Chelsea are said to be open to selling Willian, if they can make better value from his sale and will use that money to fund his replacement this summer, but would prefer to sell the Brazil international abroad. Barcelona have been heavily linked with a move for the 29-year-old and have reportedly even had a £50m bid turned down for the hard-working winger.

Meanwhile, Riyad Mahrez of Leicester City is on the verge of joining Manchester City in a deal worth in excess of £60m and Chelsea believe Willian is worth at least the same, if not more.

Despite Chelsea’s inability to settle on a new manager, the Blues are expected to negotiate Willian’s departure following Brazil’s elimination from the 2018 World Cup and United believe they are the favourites ahead of Barcelona. And his arrival would pave way for Anthony Martial to leave the club even though they are competing for different positions.

Willian has scored a total of 45 goals in 325 appearances for the Blues, where has won two Premier League titles, the FA Cup and Europa League trophy.