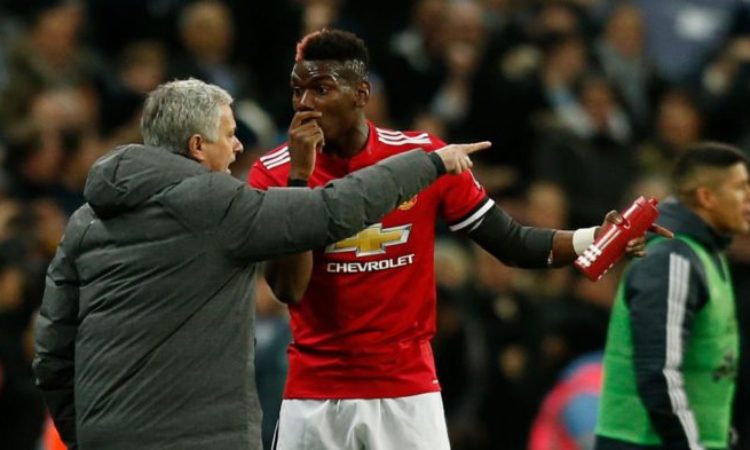 February 17, 20180
Manchester United midfielder Paul Pogba is having a rough patch lately and have been linked with a move to Real Madrid according to English sources. The former Juventus star has largely struggled to find form since the beginning of 2018 and is unhappy with his current role in the side. According to L’Equipe, the midfielder has even pleaded with Jose Mourinho to adopt a 4-3-3 with him on the left of the midfield three in order to get the best out of him again.
The Frenchman has not completed any of the Red Devils’ last four games and his relationship with his coach is believed to have gone sour. In England, there is already speculation that he could depart by next summer Madrid as his likely destination though Manchester united might make the move difficult due to the lofty 135 million euros price tag on him. Former Manchester united player feels that the arrival of Alexis Sanchez is limiting the Frenchman’s chances at the club.
Jose Mourinho however denied the speculations during press conference on Friday adding that the Frenchman have not been playing his best but the club is working on it. With part of the speculation centered on the inability of Mourinho to field Pogba in his favorite position, Mourinho insisted that the Frenchman played in his favorite position in their 1-0 loss at Saint James Park. Mourinho admitted that club need Pogba to return to his best form in order to end the season on a high note, but the 55-year-old hit out at speculation he could be sold in the summer citing that it will never happen.
The Portuguese man confirmed Pogba will available against Huddersfield in the fifth round of the FA Cup at the John Smith’s Stadiumon Saturday. Eric Bailly is also fit to return after missing the past three months with an ankle injury.
Post Views: 418
Jose Mourinho Denies Pogba Rift Pogba Rift Pogba Trending News