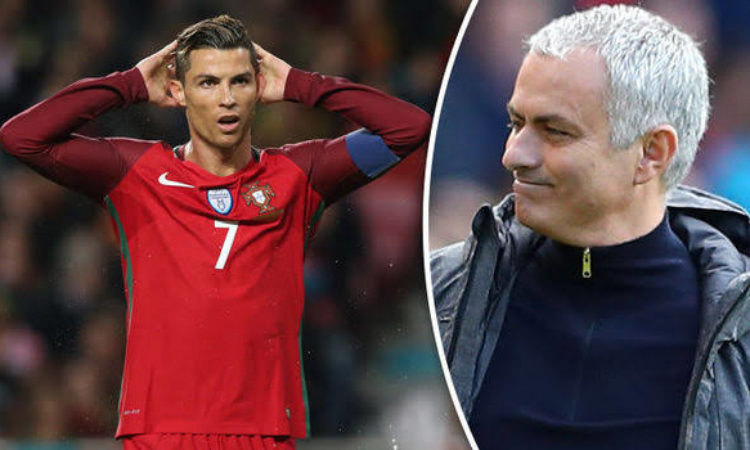 The special man showered praises on Cristiano Ronaldo after his country man recorded a historical hat-trick for Portugal in their 3-3 draw with Spain on Friday night.

The current champions of Europe looked to be on the losing side in Sochi stadium until the world footballer of the year took a stunning free-kick past the Spanish number one David de Gea late on, the free-kick was his first from a set-piece in 45 attempts at major tournaments.

Ronaldo’s hat-trick was his 51st in his glorious career and happened to be the number 51st hat-trick in the history of world cup and has also became just the fourth player to score in four different World Cup tournaments, and Jose Mourinho couldn’t help but admonished praises on the portuguese forward.

He Ronaldo made it clear to Russia that ‘He has what I used to call taking control of the game, that’s the best way of playing football said Mourinho.

‘He acknowledged that the team can’t perform excellently well without his touch of class, he knows they are not creating, he sometimes looked frustrated on the pitch, nobody could see Portugal scoring and he knows that through set plays they can hurt the Spanish side and he achieved his aim.

‘The position of the free-kick is a point I saw him train free-kicks for hours after training during my time in Madrid, he do ask one of my assistants to put the wall for him, to stay and provide him with balls.

‘He was looking for that, he gave his body to the defender, looked for contact and got it. He is very clever, and was in control of every angle. He got the free kick.

His recent record is not the best for the number of free-kicks he takes for his club and national team, for him not to score as much as he used to for Manchester United and the first years at Real Madrid.

‘But this one is so special and crucial. It’s what can affect the team positively, the confidence, the next match, the rivalry between Portugal and Spain, what it means for Portuguese people.

‘And that his little touches, that little extra feeling, and his goal is fantastic. The wall is correct, the goalkeeper is correct, but the flight of the ball is impossible to save. Far top corner.

And I must say he is indeed matured and a complete player who has written his name in the world’s most legends of players both past and present.