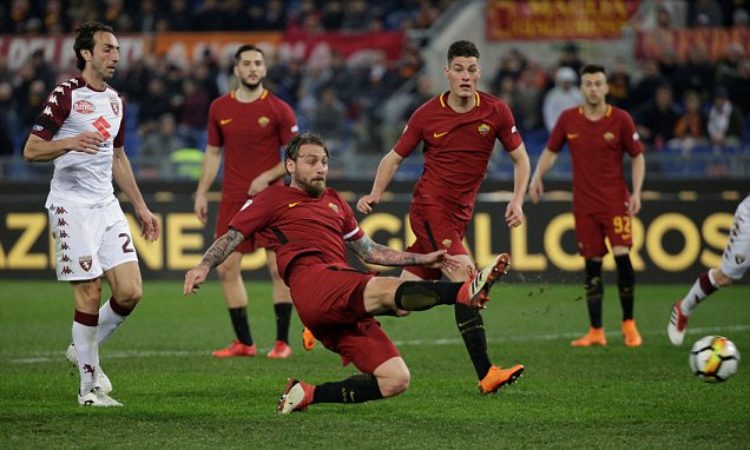 March 11, 20180
Roma were able to tighten their grip on 3rd position with a comfortable 3-0 victory over Torino at the Estadio Olympico. The game looked dull in the first half but the home side ran riot in the second interval. The Seria A season resumed on Friday seven days after the death of Fiorentina captain David Astori.
The footballer’s suddene death led to the postponement of Sunday games last week. The atmosphere was understandably subdued at the Stadio Olimpico, where Roma attacking might was perceived to be blunt due to the absence of talisman Edin Dzeko, who missed out through suspension. Roma boasted by their last week exploits in Naples with the Roman side winning a 6 goal thriller fiasco came into this game.
Manolas was able to score the crucial goal after a dull first Interval. Kostas Manolas gifted the Roman outfit the lead in a 56th minute after linking up with Florenzi en route the goal. Manolas during his celebration fell to his knees and pointed to the sky as he pays tribute to Italy international Astori following his goal, which put Roma on track to follow up a 4-2 win over leaders Napoli with another three points.
Captain Daniele De Rossi made it two on the 73rd-minute by stretching to divert a high ball home, with Lorenzo Pellegrini wrapping up the points in injury-time with a close-range finish.
The result confirmed that Roma will move four points ahead of fourth-placed city rivals Lazio as the battle for Champions League qualification heats up, Roma guaranteeing they will end the weekend in third before their reverse fixture game against Sharkter Donetsk in the Uefa Champions league comes up next week.
Post Views: 394
Roma Trashes Torino 3-0