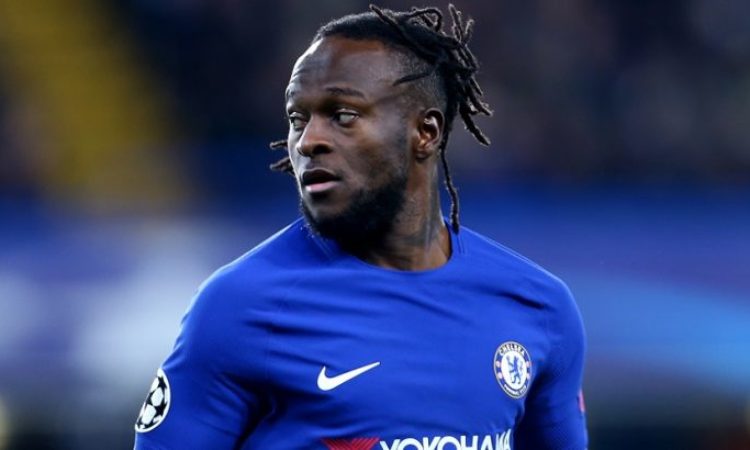 Former Nigeria International, Victor Moses has taken some time off to reflect on his time with Chelsea since joining the Stamford Bridge outfit in 2012.

Victor Moses came out to say his six year stay so far with the London club had been full of ‘amazing memories’.

The 27-year-old joined the Blues from Wigan Athletic on August 24, 2012, then went on loans to Liverpool, Stoke City, West Ham United as he looked to gain valuable experience and playing time in the English Premier League.

It was however during Antonio Conte regime after he was converted from a winger to a wing-back that he really flourished, featuring in all but four league games in the 2016/2017 season as the Stamford Bridge club secured its sixth English Premier League title. Read more at https://footballlive.ng/retired-nigeria-winger-reflects-on-his-chelsea-career/

Save for a missed penalty, Samuel Kalu enjoyed a good evening of football in the Ligue Un for Bordeaux as his side picked their first win of the season.

Kalu had his penalty saved by AS Monaco’s goalkeeper, Diego Benaglio with the scoreline tied at 1-1. Eventually, the home side would go on to win with a strike from Francois Kamano on 90+2 minutes in additional time.

For Kalu, the Nigerian was rated 7.2; the third best performance of any Bordeaux player, per WhoScored.com. Read more at https://footballlive.ng/super-eagles-invitee-misses-penalty/

Nigeria play away to Seychelles in a 2019 African Cup of Nations qualifying match next month and while the teams aren’t on the same level, based on pedigree, we have 6 reasons why the Super Eagles should be wary of this trip to the Island Nation.

Seychelles may not be known for their footballing prowess, indeed, ranked 188 in the world and 139 places below Nigeria in the latest FIFA Monthly coefficient for countries, but, what they lack in football talents, they more than make up for it in pleasure spots. Read more at https://footballlive.ng/6-reasons-why-rohr-must-be-worried-about-super-eagles-in-seychelles/

Counsel to the Nigeria Football Federation (NFF), Festus Keyamo (SAN), has dismissed claims that a Supreme Court ruling prevents Amaju Pinnick from serving as president of the NFF.

Keyamo, a Senior Advocate of Nigeria also averred that the August 26, 2014 election mandate Christopher Giwa is laying claim to for the coveted NFF position expired yesterday after four years.

In a press statement issued yesterday, Keyamo (SAN) wrote: “We have read some reports in the mainstream and online media by some uninformed and/or deliberately mischievous persons to the effect that there is a subsisting Supreme Court Order restraining Amaju Pinnick from acting as President of the Nigeria Football Federation (NFF).

“These reports were fuelled by an earlier Press Release by the office of the Hon. Minister for Sports dated July 2, 2018 as well as another Press Release from the same office dated August 21, 2018, regarding the current suit which portrays the current NFF leadership as irresponsible, as usurpers and as contemnors. Read more at https://www.thisdaylive.com/index.php/2018/08/27/keyamo-no-supreme-court-order-restraining-pinnick-as-nff-president/

Victor Moses will not make his second Premier League appearance of the new season in Chelsea’s game week three clash against Newcastle United at St James’ Park this afternoon.
One of the big names omitted from The Blues squad is Moses, who quit international football eleven days ago in order to focus on his family and club.
The Blues number fifteen is behind Pedro, Eden Hazard and Willian in Maurizio Sarri’s pecking order of wingers and the trio have been included in the 18, with the Spaniard and Belgian starting, while the Brazilian is on the bench.
Chelsea’s Nigerian fans took to Twitter to question the decision of Moses to quit the Super Eagles when there’s uncertainty over his future with Chelsea following the arrival of Sarri, who prefers to play in a 4-3-3 formation.
Here are some selected Tweets :

@Benco14 : ”Victor Moses can’t even make the bench again? Hehehehehe seems days of guaranteed shirts are over, Willian knows he has to be exceptional to keep Hazard on the bench,sorry Pedro, but the diminutive Spaniard scores a lot. Between Cahill,Luiz and Christensen thats the final spot.”

@adetolafaruk : ”I look at @ChelseaFC line up and bench, then i realised @VictorMoses is sliding away from the team and dude quits Nigeria because he wants to focus on a team that has shifted its focus away from you. @NGSuperEagles is no man’s land, soldier go, soldier come, Barracks remain.”

@0luwo : ”victor moses didn’t even make chelsea’s bench for the match against Newcastle.Someone needs to remind Sarri that moses retired from international football to focus on club football”.

@Waju_ : ”Victor Moses retired from International football to focus on Chelsea but now he can’t even get into the 18 man squad. This God I serve ?