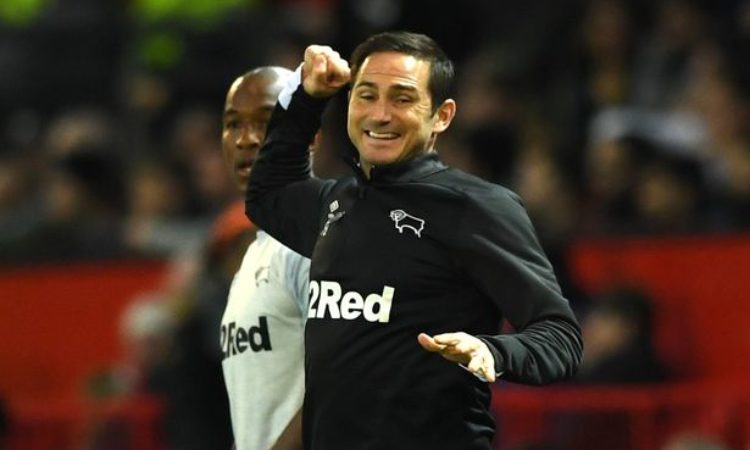 Frank Lampard picked up one of the biggest victories of his young managerial career, as Championship side Derby County showed Manchester United managed by his former trainer Jose Mourinho the exit door of the Carabao cup. Manchester United came into the game on the back of a 1-1 draw with Wolves in the weekend, but failed to progress beyond the third round as Derby grabbed the spotlight.

Derby County won the shootout 8-7 after the game had ended 2-2 after the 90 minutes. Manchester United had to drag the game to shootout stage after Marouane Fellaini rescued the Red Devils with virtually the last kick of the game.

Lampard, who was a player under Jose Mourinho during his playing days, was rewarded for fielding a strong team unlike other tacticians in the competition. The former midfielder fielded the same team that defeated Brentford 3-1 last weekend. “It was the easiest selection I’ve had. They played so well against Brentford and I knew how much they all wanted to play. I wanted to come here and win,” Lampard told reporters.

It was a tensed affair during the spot kick but Derby County kept her cool to ensure the scored all spot kick.

“I’m a bit shell shocked (but) in a good way,” said Lampard. “What a performance from the team and in terms of personality”. “To have the personality to step up and take penalties and perform the way they did, I’m just a proud manager, they were great,” he added. “I am trying to build a group to be successful and nights like this are incredible. To go against world-class players and play that way, it’s right up there.”

The highlight of the game of Derby’s equalizer in the 59th minute, which was drilled out by 21yr old Harry Wilson from 30 yards out.

“I know we are a good team, we wanted to come here and go toe-to-toe with United,” said Wilson. “The free kick was too far out to curl it so I put my laces through it and tried to get movement on the ball.”