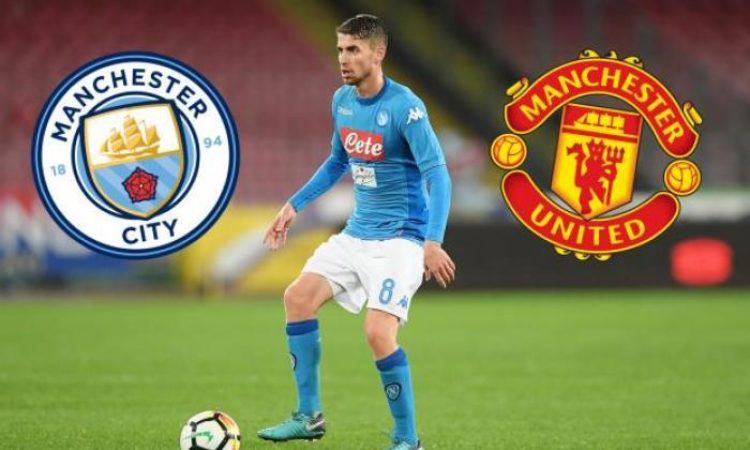 Manchester City Gazump Manchester United to the signing of Jorginho

It is believed that the two Manchester clubs are in hunt of Napoli sensation midfielder but it looks finally that Manchester City have dealt a blow to their neighbours by agreeing a £43.1m deal to sign the highly rated Jorginho from Napoli.

The Italian emerged on the sky Blues transfer target last season after an important display at the base of midfield under Maurizio Sarri.

Jose Mourinho has already completed the signing of midfielder Fred from Shakhtar Donetsk but many supporters feel that only Fred’s signature won’t be enough to dominate the midfield of the opposite Manchester club with Pep Guardiola capturing Jorginho along with the already experienced midfielders at his disposal that consists Kevin De bruyne, David Silva, Ilkay Gundugan, Bernardo Silva and Fernandinho.

But who that second midfielder that the fans clamour for remains uncertain, but according to news which has revealed that it certainly won’t be Jorginho, who will rather move to the Ethihad soon.

Manchester United’s interest in Jorginho was forgotten back in January when Man City gave up in signing Fred by going after Athletic Bilbao’s defender Aymeric Laporte instead, and also targeting the Napoli man ahead of the summer transfer market.

nevertheless, Jorginho, a midfielder who relies on playing as attacking minded player who doesn’t mind tracking back of which Mourinho expects from his midfielders, was earlier this year made it clear that he wouldn’t play under a manager like Mourinho.

He said (“There are English teams with this style of play, ball on the ground, quick transitions, high pressure. If one of those teams wanted me, I could fit and the other way round. My football way is not an usual one.”)

After weeks of negotiations with their Napoli counterparts over the Brazil-born 26-year-old Italian player, City has finally made a breakthrough this week and are now hopeful of finalizing the deal in the next few days.

Reports in Italy claimed Jorginho and his agent arrived in London on Wednesday, with further meetings said be hold in other to discuss bonuses, which could total up to £5.

He is expected to sign a five-year deal at the Etihad Stadium and become City’s first signing of the summer.