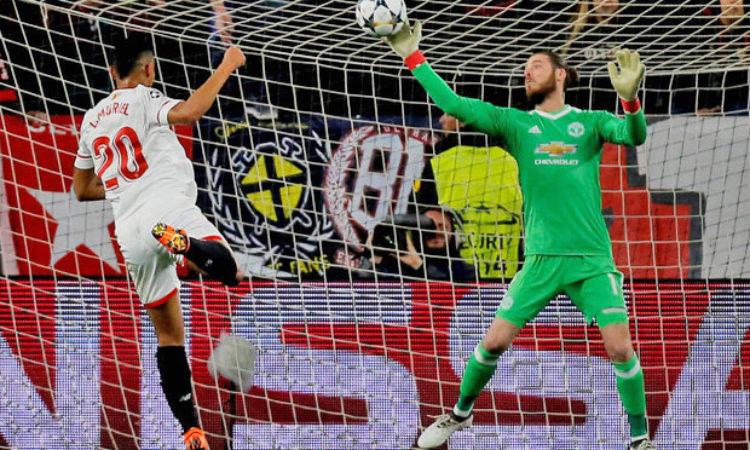 Manchester United Earned a 0-0 Draw Against Sevilla side in the first leg of the UEFA Champions league knockout tie. They Manchester club managed six shots to the home side’s 25 in the game. It is not exactly surprising considering that Mourinho deployed his old-school defensive tactics to the game with only Alex Sanchez licensed to surge forward when infact he would have gone for open-flair attacking option considering the quality of players in his team. In the end, he was left praising David de Gea, whose opposing number Sergio Rico was barely tested.

The Spanish No.1 proved once again why he is the currently best shot-stopper in the world with his good reflexes, agile movement, command of his area and skill with the ball at his feet by denying Luis Muriel in what was the best chance of the game on the night. Pogba’s introduction early on in the game had no significant impact as the Frenchman was unable to inspire the away team to surge forward. The Frenchman’s introduction was as result of an injury sustained by Andre Herrera as early as 16 minutes into the game. Lukaku isolation upfront forced the Belgian to be quiet in the game. Sanchez was also choked out on the left wing as make shift wing-back Jesus Navas dominated the position. The inability of the front-men to deliver due to the tactics shifted the balance of the game as the players at the back became exposed.

Manchester united had to rely on the brilliance of De Gea on several occasion to keep the game at 0-0. Alexis Sanchez was finally put of his misery as the Chilean was replaced by Marcus Rashford for the remaining15 minutes. The substitution added a little more direction to the visitors’ attack. United suddenly looked an actual threat with introduction of Anthony Martial for Juan Mata but it was a good move that have come rather too late as the tie ended 0-0. The result means Manchester united must win at old Trafford in the reverse fixture if they want to progress to the next round of the European competition.