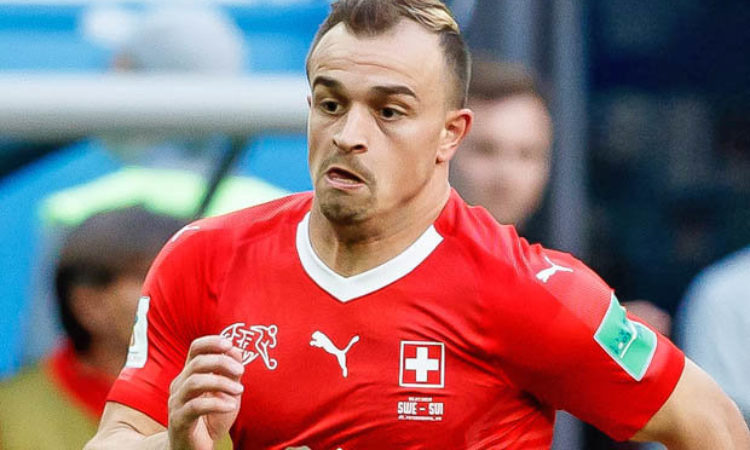 Manchester United set to challenge Liverpool to the signing of Shaqiri

Xherdan Shaqiri has been heavily linked with Liverpool after his club were relegated last season, but according to report that the move failed to go through before the world cup began, the 26-year-old Swiss playmaker performed well in the group stage, before they were dumped out from the tournament by Sweden at the round of 16.

We have just five weeks away for the 2018/2019 Premier League Campaign to get started. And based on recent development and agreement between clubs, the said date for transfer deadline is now August 9th instead of the previous date which was August 31st.

And all the clubs in the English Premier League need to act fast in other to get all their transfer businesses done.

Nevertheless, the news emanating from the Sun has it that Jose Mourinho has now entered the race to swoop for the Stoke attacker in the noses of Jurgen Klopp and Liverpool, the player is said to cost in the region of £12m. the same news has it that the Swiss playmaker is determined to stay in England, so it’s now a battle between the two English heavy weight clubs on who to sign the player.

While speaking to Sporx, the Swiss player stated, (I want to stay in the Premier League, and you will find out my new club soon).

However, he received much criticism from one of the United Legends Gary Neville prior to the world.

Neville told ITV, “I’m not a fan of Shaqiri to be honest with you, I think that was, to be fair, worse by the fact that he distanced himself from his team-mates as Stoke.They were unprofessional last season, Stoke. There’s no doubt, and he epitomised it. He could score the goal of the tournament and he could have the most amazing game. But he could also be there for three matches, do nothing and just amble and wobble around. To be honest with you, with him, players like that I can’t have. I struggle with it.”

Meanwhile, the two most successful clubs in England are far yet to complete all their transfer targets after Liverpool, who has already in their ranks Naby Keita from RB Leipzig and Fabinho from Monaco while their fierce rivals Manchester United have already snapped the likes of Diogo Dalot from FC Porto and  Fred from Shakhtar Donetsk.

Both clubs have demands of challenging Manchester City to the Premier League crown, but they must make a big improvement in order to succeed, after Manchester City won the League with 19 points difference ahead of their neighbours United.