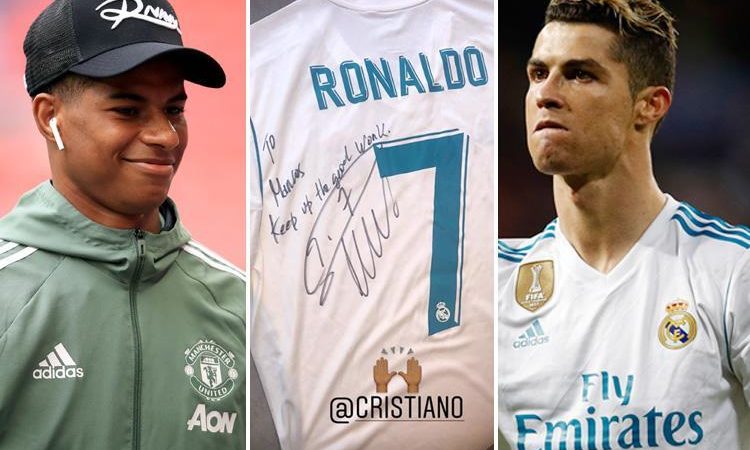 During a recent interview with the England striker, Marcus Rashford made it known that Cristiano Ronaldo have been his idol who has motivated his style and way of play from Ronaldo’s days at Manchester United and the England forward gave his verdict that the Portuguese superstar is arguably the best in the world.

The five time Ballon d’Or winner has lit up the World Cup in fashionable form with four goals from the opening two matches and most memorably the hat-trick against Spain, he is currently the leading goals scorer for the tournament Golden Boot.

The United 20year old and Ronaldo who share very close relationship has made it known to the world that his Idol is the currently the best ahead of Lionel Messi of Argentina because he believes that Ronaldo keep improving his game day after day, you can see how he steered Portugal to two wins out of two so far.  It was reported that before Manchester United’s FA Cup semi-final against Tottenham in April. The Portuguese ace sent Rashford a pair of red Nike Air Max 97 CR7 trainers and a signed Real Madrid shirt to show how close the two players are.

Rashford made it known during the interview that Ronaldo keeps making the best of moments unbelievably real and no one motivates him more than the Real Madrid forward.

He said ‘Is he the best in the game right now? I would say so. He is not only maintaining it but he keeps hitting new heights.  ‘To get to that level it takes years and years of doing the same things in training every day.’

Meanwhile the two players haven’t met or played against each other and right from His time at Old Trafford treats the young star with love and advises him whenever Rashford craves for it.

Looking at how the World cup is progressing, it will be well to say that England and Portugal both will progress to the knock-out stages, remaining to be know if the two European sides will go against each other later in the competition to dictate how formidable their friendship is.