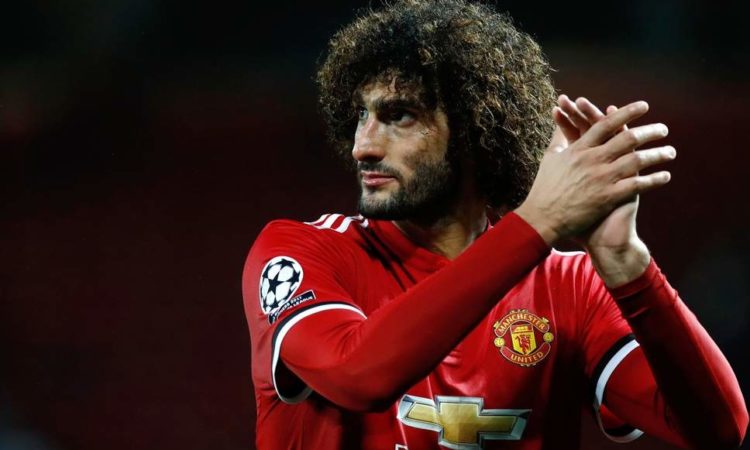 After several months of negotiation, Maroune Fellani has finally signed a new contract that will keep him at Old Trafford till summer of 2020, with an option to extend it to one more year.

Manchester United have confirmed that the tall Belgium midfielder has extended his contract with them after he signed a new two year deal.

It was a dramatic months of negotiation in which the 30-year old and his representatives were battling and trying to find a suitable contract for Fellaini, it was reported that he was close to joining Arsenal but all was recorded as a way to make United accept his proposal, which the both parties finally agreed terms, however, this development will allow the player to focus more in the world cup where he is on International duty with Belgium.

Having stretched the decision of committing his future, most United fans were all expecting that Fellaini will leave the club after his contract expires on July 1.

The fans were not impressed with his form last season especially when ever Mourinho picks him for some games, but Jose Mourinho has always protected and spoken for his players, he has always backed the Belgium midfielder because he utilizes him whenever he prefer to change formations that suits the 30-year-old.

Nevertheless, the powerful tall Belgium showed why United tried to extend his contract, after his impressive performance against England in their last group game of which Belgium came out victorious. The United fans have all said same thigh about his current form but ask that it shouldn’t just stop but let it continue next season.

Manchester United fans should just support than criticizing their own player, he has signed and will be at old Trafford for the next two seasons, the question is why not give him the chance since he is just in for back up cases.

However, Fellaini had this to say after signing the contract extension, (I am pleased to be continuing my journey as a Manchester United player. I made this decision because I am very happy here. Also, I feel like this team, under Jose, still has a lot we want to achieve. I would like to say a special thank you to Jose for the faith he has always in me).