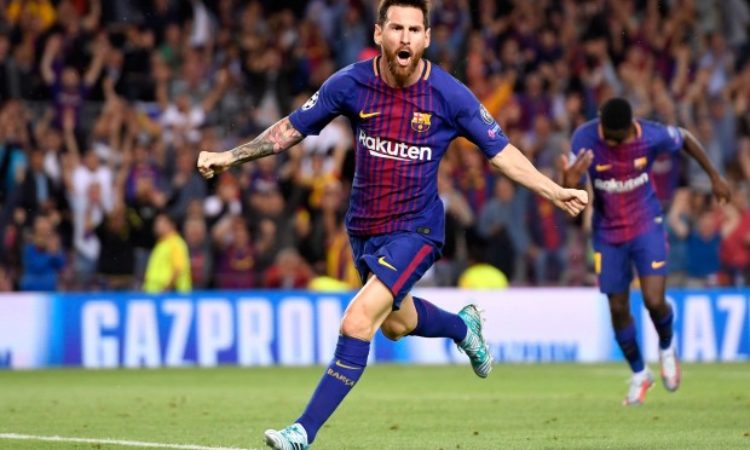 November 25, 20170
La Liga_Reports emanating from Spain have confirmed that Argentine and Barcelona super star Lionel Messi has officially put pen to paper on a new contract tieing him to the Catalonian club for the foreseeable future thereby ending all speculation linking away from the Nou Camp. This news is coming after the forward picked up a fourth European Golden Shoe, equalling the record of great rival Cristiano Ronaldo, on Friday.
The 30-year-old attacking sensation who is viewed by many as the best player to grace a football field is said to have signed the new deal that will carry him through with the club until he is 34, with a mammoth €700m release fee.
Messi’s future had been the subject of much speculation especially after Neymar left the Camp Nou club for Paris St. Germain and his previous contract was due to expire at the end of June 2018, which would have left him able to negotiate with rivals as of January 1.
A reunion with Pep Guardiola at City had been mouthed in some quarters following reports that Messi was not happy with the running of the side amidst several off field scandals.
However Club President Josep Maria Bartomeu had been insistent that a deal had been reached with the academy graduate, who has established himself as one of the world’s elite players during a professional career at Camp Nou spanning 14 years, having first arrived at the club as a 13-year-old in 2000.
During this period, Messi has played 602 times for the Catalans and has scored 523 goals, helping them to 30 trophies – a joint club record held alongside team-mate Andres Iniesta.
He has won La Liga on eight occasions, earned five Copa del Rey crowns and led Fc Barcelona to four Champions League titles.
On a personal basis, he has won an unprecedented five Ballons d’Or trophies. He has equally shattered records at all levels, notably being the Spanish top-flight’s all-time top marksman.
Having entered his fourth decade, he shows no sign of allowing his form to slip. In the first 19 appearances of the 2017-18 season, he has amassed 16 goals in all competitions and has been credited with a further five assists.
His new deal will keep him at Barca until he is 34, with club legend Xavi suggesting that might be a good point to retire. However, the player has previously expressed his desire to one day return to childhood club Newell’s Old Boys .
Barcelona currently enjoy a four-point lead over second placed Valencia in the Primera Division, with a 10-point gap back to Real Madrid.
Post Views: 609