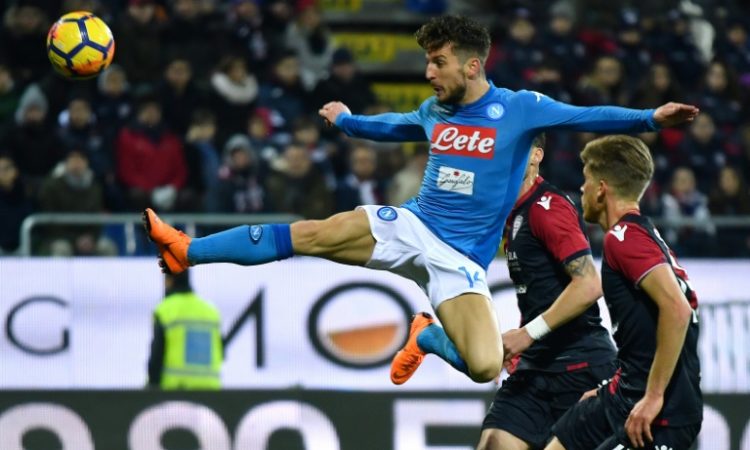 February 27, 20180
Napoli was able to extend their grip on the Italian Seria A with a comfortable 5-0 away win at Cagliari to extend their point advantage over Juventus to 4 though the Old lady have a game in hand as their weekend game against Atlanta was shifted. The Rome based club bounced back from their shock exit from the Europa league to dump Cagliari.
Napoli’s superiority began as early as the first minute with the rome based club testing the Cagliari shot stopper in the 5th minute. The Host were able to hold on to the scoreline until the 29th minute as Jose Callejon broke the deadlock after strings of beautiful combination with Allan. The league leader continued to display the superiority against the host and were finally rewarded with the second goal by Mertens who scored at the 43rd minute to end officially end the game as a contest.
Hamsik netted the third goal barely a minute after hour mark to open the flood gate for rampant Napoli attackers to feed on. Cagliari searched for immediate response with the introduction Cossu who was able to gift the host team a set piece from an inviting angle. Jose Reina was there to deny Charalampos Lykogiannis rom the resulting set-piece. The host team’s pressure was once again curtailed as Napoli resumed their pressure which ultimate brought a penalty after Leandro Castan obstruct the ball with his hand. Insigne made it 4 with a text-book finish from the spot. Mario Rui made it 5 late in stoppage time to ensure that the Napoli supporters that travelled with the club to Cagliari got exactly the quality of football they hoped for.
Napoli will be hoping to carry on their win streak of 11 games in the league as the Rome based club last tested defeated at the hands of Juventus. Cagliari remains in 15th position, 5 point off the drop zone.
Post Views: 357
Napoli 5-0 Victory at Cagliari