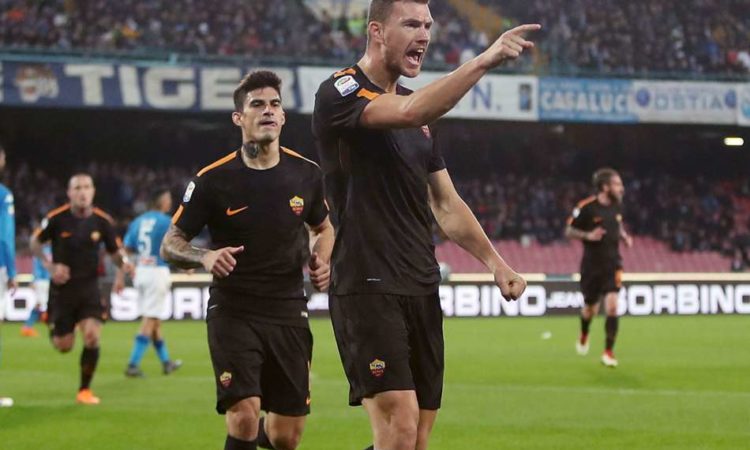 March 4, 20180
Napoli surrendered an early lead against AS Roma to concede defeat that could prove to be to be a heavy blow to their Seria A title ambitions. The Roma based club began the derby match in dominant manner but finished miserable as Dzeko and co ran riot within the course of 90 minutes in the game. Juventus earlier grinded out a win at Lazio with a 1-0 victory and this has placed the onus on the Rome based club to return to the summit of the Seria A. The result have ensured that the Rome based club finishes 2nd this week.
Napoli began the game in the brightest manner and were rewarded with a lead in the 7th minutes thanks to Loreno Insigne. Their lead however lasted for a minute as Under C levelled for the away side almost immediately after strings of play from Nainggolan. Dzeko and Florenzi combine to gift the away side the lead in the 26th minute. Napoli searched for the equalizer but were denied on twice within a space of 2 minutes by the Roma shot-stopper. Loreno Insigne’s attempt on both 41st and 43rd minute was saved by the Roma goalkeeper Alisson.
Alisson carried his first half heroics to the second interval was able to save the crucial Loreno Isigne’s attempt in the 68th. 5 minutes later Eden Dzeko made it 3 to officially end the game as a contest with Aleksandar Kolarov assisting. In the 80th minute Perotti made it 4 as Roma looked to have opened the floodgates. The Napoli team have collapsed but the side was able to reorganize themselves and pressure the away team. Mertens finally got the consolation for the host 2 minutes into regulation team but that was it as the host could not prevent a 4-2 derby defeat to As Roma.
Post Views: 326
Napoli Surrender Seria A Lead in a 4-2 Derby Defeat to Roma Roma Defeats Napoli 4-2