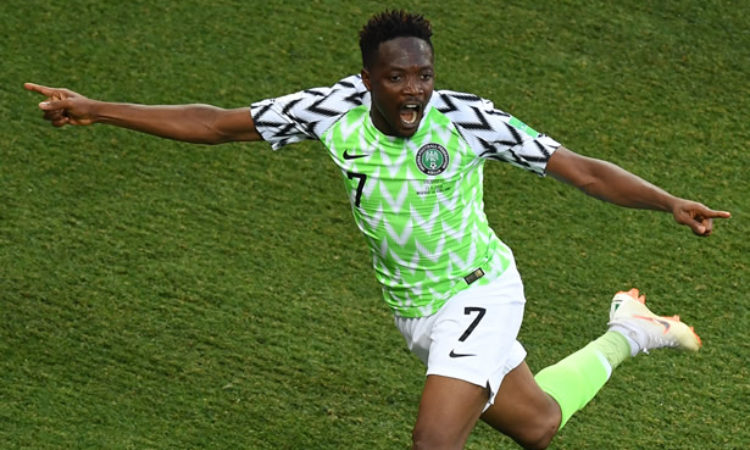 Super Eagle’s tactician Genort Rohr and the millions of supporters of the Nigeria football team, will place their hopes on Ahmed Musa when the Super Eagles lurk horns with Libya at Godswill Akpabio stadium in Akwa Ibom state on the 15th of October. The player who seems to have lost his spot in the Nigerian’s starting eleven have reinvented himself to become a pillar.

Ahmed Musa seems to be in the form of his career for the national team with the former Leicester city and CSKA Moscow attacker netting a superb volley in the last African qualifying game against Seychelles. The former Kano pillars footballer prior to the African Cup of Nations qualifiers, had a good world cup outing at Russia with the Nigerian team with the player netting twice in the competition.

Genort Rohr monitoring the player’s qualities and excellent contribution to the team recently rewarded him with Captaincy role in the absence of Mikel and retirement of Victor Moses when Nigeria take on Libya.

Nigeria currently lies in third position with three points after two round of qualifying games. The Super Eagles lost to South Africa 2-0 last year, but have put their AFCON qualification dream back on track with the recent 3-0 victory over Seychelles.

Unlike the game against Seychelles where Rohr had a lot of absentees with Ola Aina, Alex Iwobi, the German will have a lot of players at his disposal when the face each other. Despite the availability of several options at his disposal with Iwobi, Ihenacho topping the list, Rohr’s decision to gift the Musa captaincy role means that the German tactician is no longer in doubt about his credentials, as he places faith in him to lead the super eagles team.

It would be interesting to watch the tactical setup the Genort Rohr will deploy at Godswill Akpabio stadium, but one fact is certain Ahmed Musa will have play a crucial role in ensuring that Nigeria defeats Libya to put their African Cup of Nations aspirations back on track and Rohr subscribes to that reality.