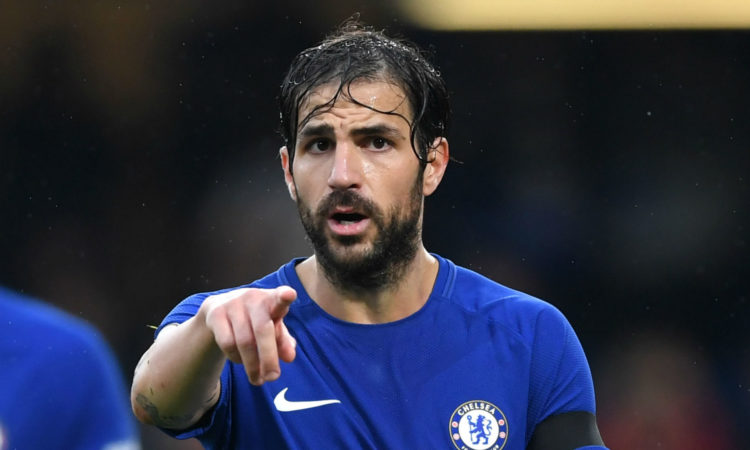 Opinion: Why it’s time for Fabregas to depart Chelsea

Fabregas might have been instrument to Chelsea’s 2015 Premier League title success but it’s time for the Spaniard to leave the London club. Cesc Fabregas was instrumental to Jose Mourinho’s team when Chelsea lifted the Premier League, but the arrival of Maurizio Sarri could signal an exit.

The arrival of Maurizio Sarri to Chelsea from Napoli last summer have seen the Blues revert to a 4-3-3 formation from 3-4-3/3-5-2 formation previously deployed by former Chelsea boss Antonio Conte. Maurizio Sarri keen on meeting up with Chelsea’s demand for entertaining football brought Jorginho with him. The Italian according to reports seems to have built his tactical approach on the player as the midfielder who sits deep at the middle of the park controls the match proceeding. Sarri also seems to have deployed defensive midfielder N’Golo Kante in the right hand side of the midfield. The French midfield have excelled in the role and is expected to permanently seal the spot. With the two midfield position sealed at the moment, attention turns to the left hand side of the Blues midfield.

Chelsea currently has Ross Barkley, Mateo Kovacic, Reuben Loftus-Cheek and Cesc Fabregas all in contention for the left hand-side of the midfield. Uncertainty have surrounded Cesc Fabregas in Chelsea as recent turn of events implies that the Spaniard is unlikely to fit into Sarri’s plans. Fabregas on arrival to Chelsea from Barcelona in the summer of 2014 played in the “No 10 role” with Nemanja Matic as his partner at the middle of the park. The Spanish proved to be creative but lacked the quality defensively as Chelsea suffered the 2015/2016 league season. Antonio Conte’s arrival meant he was to play bit part role as the Italian went with the midfield configuration of Matic and summer signing N’Golo Kante. The Italian in a bid to transform the club to an entertaining brand tweaked his formation a 3-5-2 in a bid to feature the 2014 Euro winner but ultimately lost his jobs.

Fabregas no doubt is great footballer offensively but have proved to be shambolic when called upon to win possessions at the middle of park. The Spaniard have shown little effort in addressing his defensive woes despite plying his trade in positions that requires such quality and this is likely to cost him in Sarri’s team. Sarri operates his Chelsea team with Jorginho as deep lying playmaker. Fabregas and the former Napoli midfielder seems to share the same possession attributes but the former Napoli midfielder is more stable defensively. Sarri is unlikely to feature a player with such poor defensive stats in front of his back four. The inability of the Spaniard to contribute defensive means that Kante’s position is almost impossible. The Frenchman offers both offensively and defensively as he seems to have mastered his new role. Kante also have the pace and tenacity lacked by the Spaniard who is at his twilight for the position. Fabregas certainly has football experience more than the trio of Barkley, Kovacic and Loftus-Cheek but lacks the pace required in such role. Fabregas who is slow with the ball could delay the Chelsea attacks especially in the final third.

Fabregas who is known for passing will have to accept that his playing days at the Bridge is nearing its end if he is to remain at the club. The Spaniard is expected to depart Chelsea in the nearest window as his desired spot have been occupied by a younger and dynamic midfielder in a different formation that hardly favors him.