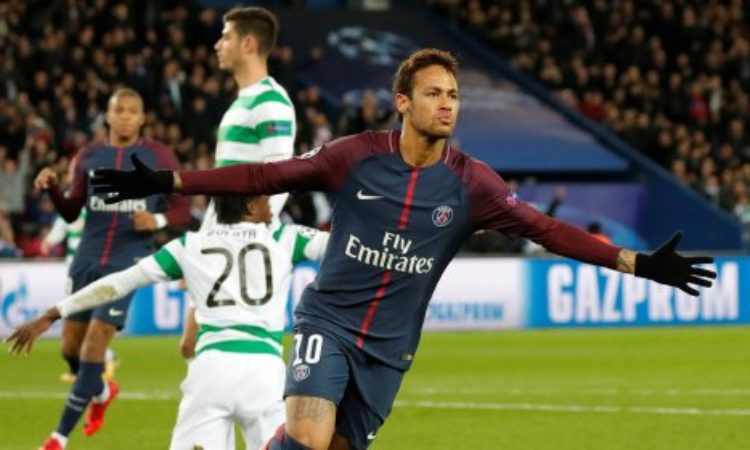 November 23, 20170
Paris St Germain made Champions League history last night by becoming the team that have scored the highest number of goals in the group phase of the champions League.
Ligue 1 giants which boasts arguably the best attacking triumvirate in Club football trounced Scottish Champions 7:1 at the Parc des Princes to record their 24th goal so far in the champions League group stage.
They have now eclipsed the previous record of 21 goals which Borussia Dortmund set last year and have now scored the most goals ever in the Champions League group stage. That they achieved this incredible feat with one matchday still remaining, makes their achievement all the more impressive.
Paris St. Germain had come into the game with 17 goals in their kitty. They had scored five unreplied goals in their earlier fixture against Celtic in Scotland while over two legs Anderlecht could not register a reply to their nine goals. Against Bayern, who most people had believed would have  PSG playing second fiddle in the group, Paris St. Germain scored three in their meeting at the Allianz Arena in what is their most impressive victory so far in the Champions League.
Last night, Coach Emery’s  Lads needed little time to get on with the rhetorics as just 9 minutes into the duel the world’s most expensive player and the poster boy of the new PSG-Neymar put the ball past Celtic goalie Craig Gordon to begin the rout. He doubled up his tally in the 22nd minute of the game before Edison Cavani and Kylian Mbappe scored within minutes of each other to round off scoring in the first half.
The goal from 19 year old teenage sensation-Mbappe-had PSG tied on 21 goals with Dortmund but it was not to be for long as in the 75th minute Marco Verratti made it 5 goals on the night and 22 in total, effectively handing the crown of the Champions League most efficient team in the group stage to the Ligue 1 leaders. Cavani, on for his brace, and former Barcelona stalwart Dani Alves were on hand to put more shine on the scoreline.
Perhaps Paris St.  Germain only regret on the night would be that Celtic managed to put one past them through the sensational French wonderkid Dembele. Prior to that strike their defensive record was perfect as no team has been to put a goal past them.
Post Views: 582
trending PSG news