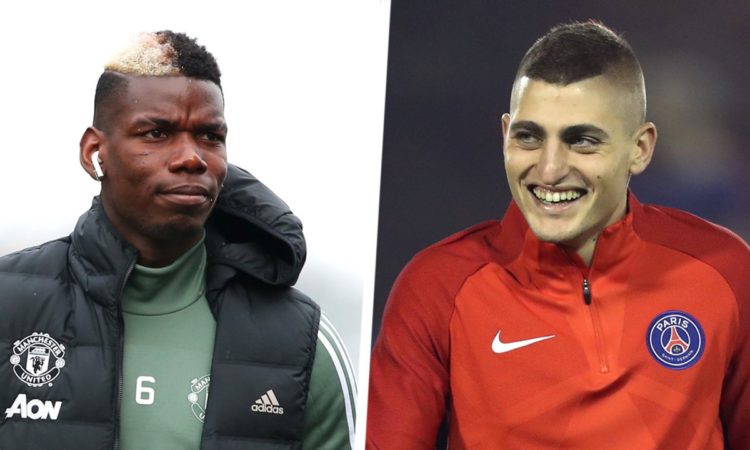 Report has it that there will be player-plus-cash deal  between two of the world’s best midfielders Verratti and Paul Pogba. Paris Saint Germain has offered Verratti plus cash to Manchester United for Paul Pogba.

According to various reports, with the big story that PSG have decided to offer Marco Verratti plus cash in exchange for Manchester United midfielder Paul Pogba.

There was a report according to Calciomercato exclusive, that Marco Verratti has been upset after meeting with his new boss Thomas Tuchel who told the Italy midfielder that he is not part of his plan and if he must be, he should try and earn his spot by working harder to be in line for starting point.

Paul Pogba in the other hand has been rumored to leave Old Trafford for some months now, and notwithstanding his relationship with Jose Mourinho after he was dropped severally in big matches by the manager over public complaints of his form, which hindered the French 25-year old from starting X1.

The French midfielder is currently on international duty with his national team at the World Cup, and it is believed that for any deal to happen, at least that will be after the tournament.

However, Manchester United has been informed by Mino Raiola who happens to be Verratti’s agent, that his client is open for sale this summer.

For several months now, Marco Verratti has been wanted by Manchester United, but its yet to been seen if they will allow Pogba leave in opposite direction and return to his native home.