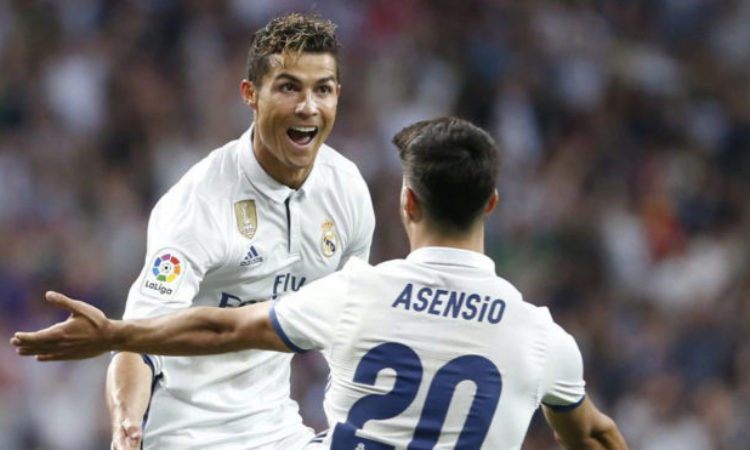 Cristiano Ronaldo’s talk of leaving Real Madrid this summer was cool by his fellow teammates who believes that the five time Ballon d’Or winner won’t be leaving the Spanish capital.

Marco Asensio has said he can’t imagined him playing for Madrid without Ronaldo Cristiano after the Portuguese striker made it clear that he will leave Real Madrid this summer.

Ronaldo has been on the media for some time now on his decision to quit the Los Blancos after the Champions League final. Because of the pronunciation making headlines in the media, his family and past managers has suggested he could end up at Manchester United.

Asensio hopes that is not the case, with the 22-year-old eager to ensure that a five-time Ballon d’Or winner remains important part of quad at the Santiago Bernabeu in 2018-19. He told Marca when quizzed on the transfer talk (I can’t imagine playing without him. Ronaldo has been, is and will be very important for us. Real Madrid and him always have to go together).

It has been suggested that Asensio could be the man to fill the void for Madrid once Ronaldo does depart, with a modern day icon now 33 years of age.

Asensio added, (We’re different players. I like to drop a little to receive the ball and have more contact with it, being less of a finisher. Everyone evolves as a footballer through learning and we’ll see in the future what position I play). A man who joined Madrid for just €3.9 million from Real Mallorca in 2014 is also keen to avoid being drawn into a debate regarding his current value.

Big teams from across Europe has tabled huge amount for the Spanish starlet, but Asensio claims to be happy where he is and refused to speak on the likely figure that has come his way in the current transfer market.

He continued, (I don’t know. I don’t control the way the prices in the market are, but it’s true that it will have gone up quite a bit since I signed, these prices are worked out by the clubs and by circumstance, I don’t know what I would be worth now).