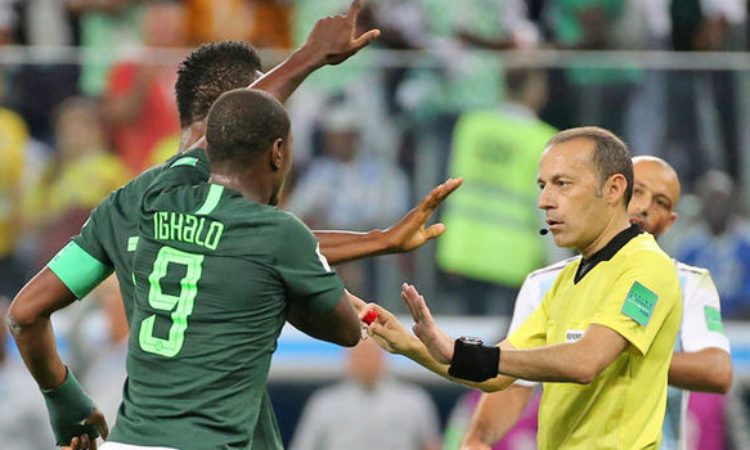 Referee’s Penalty decision on Nigeria Vs Argentina Right or Wrong ? Compared to Iran Vs Portugal

It would have turned out to be a historical night for the Super Eagles of Nigeria against the Argentines which later turned to be a night of nightmare for the Nigeria supporters, who were agitating for a penalty which the Turkish Referee denied them after VAR called for clarification. But the centre official who later decided to cancel the penalty, and allow the play to go on.

Gernot Rhor’s led super Eagles, who have came back into the play after Victor Moses leveled from the penalty spot after Lionel Messi opened the scoring at early stage of the first half and that led to Nigeria elimination from Group D.

The three time African champions, who believed that they should have been awarded the second spot kick when the ball came from Marcos Rojo’s head to his own arm. But was rather disallowed by the Turkey man.

The agitation for the spot kick came after the Nigerian striker Odion Ighalo missed an important opportunity from 14 yards, which he called for the Referee’s attention for hand ball.

The Turkish Referee Cuneyt Cakir turned down the claim, rather was informed by VAR officials to clarify the incident on the off-pitch TV screen.

The question on everyone’s mind is that really a foul (hand ball) from Marcos Rojo?

The Referee cancelled the claim after some minutes of deliberation and called for the match to continue.

Cuneyt Cakir turned it down because he believed that the hand ball wasn’t intentionally.

But the decision from VAR has already caused controversy after Iran earned a penalty against Portugal as exactly to claim as Portugal’s Cedric Soares was caught off a handball in their last Group B match.

However, the super Eagles pleaded with the Referee after he turned them down to still look into the incident well.