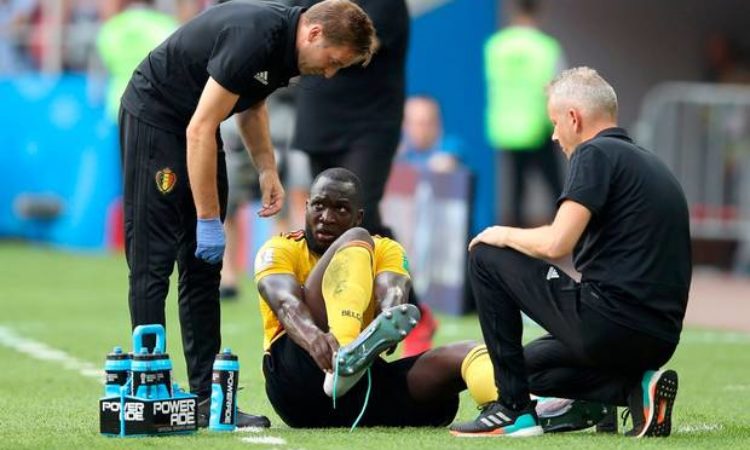 Romelu Lukaku a big doubt ahead of England clash

Belgium are concerned on the extent of an ankle ligament injury Romelu Lukaku sustained in their win over Tunisia this evening and are set to make major changes for their final group game against England.

Romelu Lukaku was praised for both his finishing and his co-ordination during Belgium’s win over Tunisia today as he scored a twice as they thrashed the African side 5-2 in an encounter sends them to the knock-out.

It has now surfaced that Belgium’s star forward could miss the team’s final group game against England, which will see the two teams battle for first place if England beat Panama on Sunday.

Lukaku was forced off in the 59th minute having scored twice in a 5-2 victory which has guaranteed Belgium’s place in the last 16. Roberto Martínez said Eden Hazard and Dries Mertens were also hurt, picking up calf and ankle injuries respectively.

Belgium’s manger said Lukaku had damaged an “external ankle ligament”. Martínez added: (“It was a knock that he had late in the first half and he tried to play through it and he couldn’t. He’s going to be assessed and then we’ll find out a bit more in 48 hours.”)

Romelu Lukaku’s goals made him tally with Cristiano Ronaldo as joint leading scorers with four goals.

Michy Batshuayi, who replace him when Eden Hazard left on 68 minutes, looked sharp and got himself on the scoresheet to take the tally to 5 after the brace from both Lukaku and Hazard. He would have scored more but was misfiring in front of goal with many missed chances.

The Belgium Coach will try to rotate his squad for Thursday’s game in Kaliningrad against England. When quizzed whether he would change the team against England he said: (“The answer is very clear. If we could have seven days to prepare the game and then have seven days for the next game I would say carry on with the same starting XI. The reality now is that we are qualified and in a tournament like the World Cup you are only as good as the 23 players in your squad).

Romelu Lukaku who has scored 23 goals out of 20 appearances will try to get fit enough to face England.