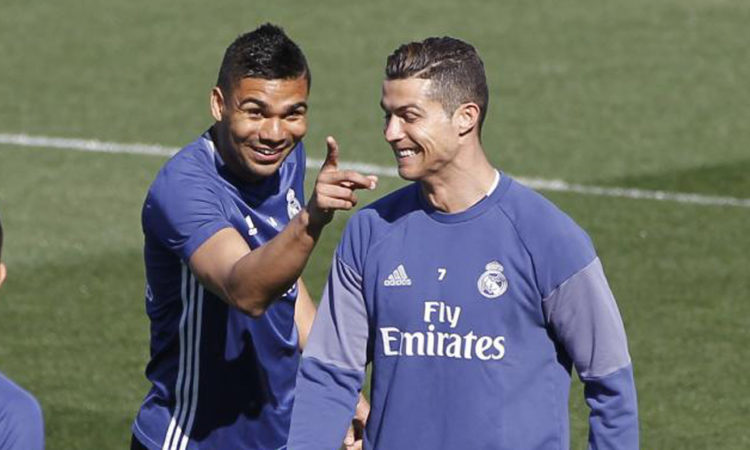 March 7, 20180
Cristiano Ronaldo and Casemeiro both scored at different ends of Cavani’s goal to send Madrid to the round of 8 in the champion’s league. The Spanish side visited Parc de Paris on the back of 3-1 aggregate victory in the first leg and were able to replicate their success in France with a 2-1 victory over PSG.
Zinedine Zidane bowed to the demands of the Madrid faithful with the starting of Lucas Vasquez and Marcos Asensio in a 4-4-2 formation while partnering Casemeiro with Kovacic in the middle-field. The Frenchman paired Ronaldo and Benzema in the centre forward position while leaving his first choice defence unchanged. Unai Emery made only few changes with the introduction of Di Maria for injured Neymer while leaving the remaining team unchanged.
The tie began in a cool moment with the host grabbing possession while the visiting team sat deep and waited for oppurtuinity to breakaway. The away side were the first to threaten with Sergio Ramos who pounced on Lucas low cross but Areola was able to keep the game on even terms. The Host with its possession had to wait till the 25th to register a shot with Di Maria from set piece. Benzema was supposed to have scored when he was present with a clear chance after Manquinho ‘s inability to clear a long pass but the Frenchman fluffed his line with Areola who made a good save. Mbappe had a chance to put the French side in the lead before the end of first interval but his attempt was saved by Navas. The second interval began in a dull manner as the Madrid continued to sit deep will the host dominated proceedings. Their dominance however did not stop Real Madrid from scoring in the game in the 51st minute as loss of possession from Dani Alves resulted in a counter attack.
Lucas and Asensio partnered to provide Roanldo with a chance to score and he made no mistake. 15 minutes later PSG was reduce to 10-man as Verrati was shown his marching orders after previously having a yellow in the game. Cavani levelled for the host in the 71st minute but Madrid re-took the lead after 9 minutes with Casemeiro after Rabbiot had lost possession prior. Real Madrid progressed to the round 8 while PSG will have to wait till next year.
Post Views: 460
Ronaldo and Casemeiro