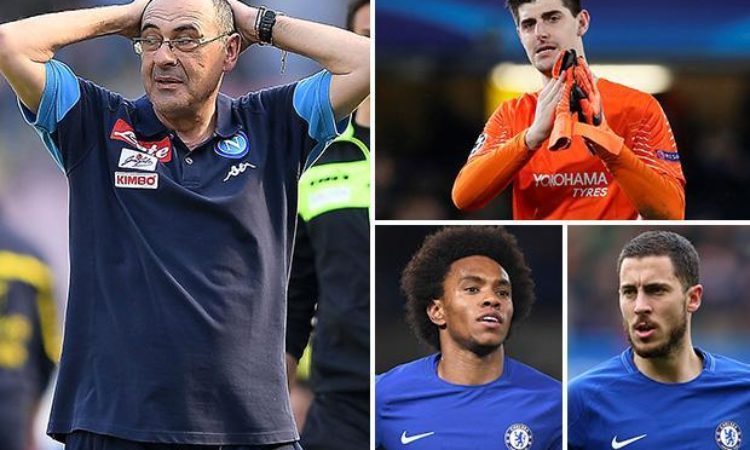 Sarri to go extra miles in keeping Hazard, Courtois and Willian in Chelsea

Sarri remains optimistic about keeping key players Eden Hazard, Thaibaut Courtois and Willian at the club, as he intends on conversing with the players when they return to Cobham later in the month. The manager hopes to convince the trio who are heavily linked with a move away from the Bridge.

Eden Hazard is believed to be heading to the Spanish capital according to French media Le10 sport, which reported last week that £170m have been agreed among the clubs. Willian seems to be a target for the Barcelona, with the London club recently rejecting £55m bid made by the Catalonian side for the player.

Thaibaut Courtois have been involved sparingly in the summer, but he is believed to heading to the Spanish capital who according to dailystar.co.uk in a reported £38m bid. This is believed to be due to the inability of the player to extend his contract with the London club.

Despite the exit rumours of these key players, independent reports that the Chelsea boss is willing to come to the negotiation table in a bid to save the Chelsea team.

Sarri in his first post-match conference after Chelsea’s 1-0 victory over Australian side Perth Glory responded to Sky sports “It’s a pleasure to have Courtois, to have Willian, to have Hazard, but their future does not depend on me. So, we have to wait I’m confident”. “I think the press sells the players every single year. They buy players, they sell players” quoted by Sarri. “I hope the trio can stay because they are fantastic players, fantastic talent and we need the best players at Chelsea”.

Sarri’s philosophy is yet to be imbibed in the clubs as both parties immediately left for Australia after unveiling, last week.