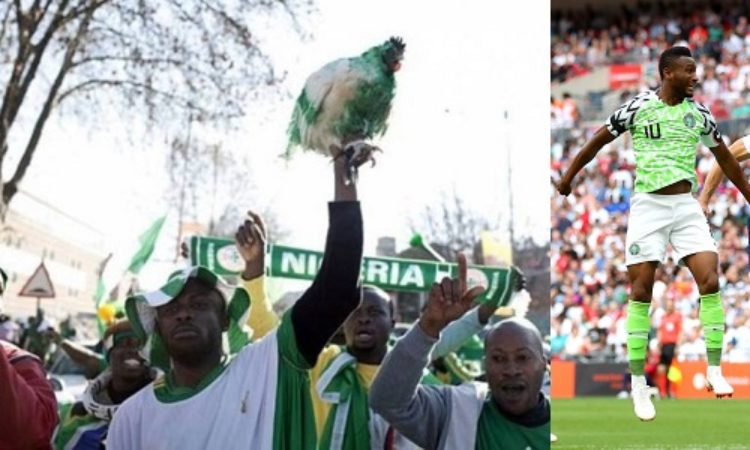 Many of the teams staunch supporters were hopeful of entering stadiums wth green painted live chickens, believing the birds are symbols to mark their identity and representing some form of goodluck for their cherised team.
However, their hopes have been quashed as the host nation government have banned the entry of animals into the stadium ahead of the team first match against Croatia in Kalinigrad on Saturday.

Speaking to the press in regards to the request by the Nigerian
supporters, Russian Minister of Culture and Tourism, Andrei Ernak has
stressed there would not be any of the West African supporters gaining
access into the stadium with live chickens.

The public official said, ”Our information center FM-2018 receives a lot of various questions.
“So, fans from Nigeria asked whether it is possible to go to the stadium with a chicken. This is their symbol, citizens are seen with them in all matches.
“We told them that it’s by no means possible to come with a live chicken.
”But if the Nigerians are rooting for their team in other places, we will of course advise them where the chicken can be bought” Ernak further stated.

News of the ban would surely not deter the team devout support from conjuring up alternative means of expressing their devoted love for the team trio of matches against Croatia, Iceland and Argentina in Group D.The most populous black nation along with Senegal,Morroco,Tunisia and Egypt will fly Africa’s Fag in this year global tournment at Russia.