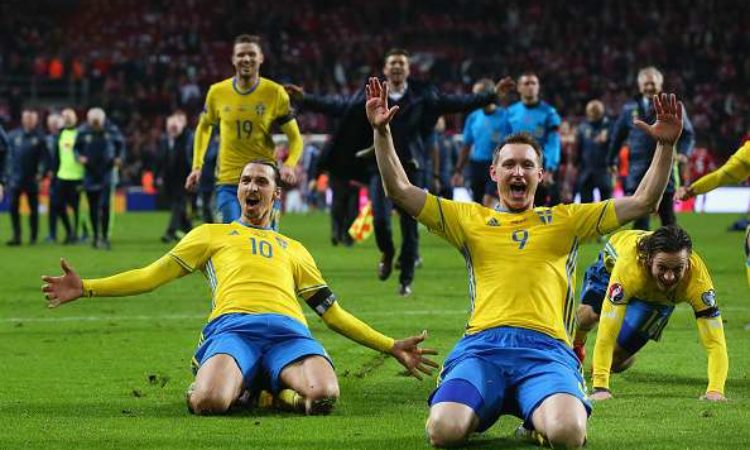 The hotel in Samara, where Sweden National team are staying was this morning at about 8:30am called for everyone to leave the Hotel premises due to alarm break up.

However, it was later reported that the alarm was falsely set off accidentally after all the players and guests have been informed to vacate through the emergency exits.

According to Geraint Hughes a Sky Sports reporter, who happened to be at the venue, said (A fire alarm went off just before half past eight local time here in Samara. The hotel Sweden are staying in had to be evacuated. It turned out to be a false alarm but nonetheless ‘irritating’ and ‘annoying’ are two words that spring to mind. The Sweden team are staying in a slightly different part of the hotel but they all had to leave their hotel rooms, all had to make their way down the emergency stairways and they had to come outside. It turns out from what we can gather from the hotel management that either it was set off from somebody smoking in their room, or somebody accidentally leaning against the fire alarm switch and letting it off. It’s irritating and annoying for Sweden. It’s not what they wanted on the morning of a big game. It could have been half 3, half 4, half 5 in the morning.

Sweden have set times for a matchday, like England do, and they will want to go through their routines, eat at a certain time, rest at a certain time, and little things like this are very annoying. It is strange how this is not the first time this has happened, be it football, rugby, NFL , an alarm going off at a hotel with a sporting team in it. I’m not rooting out for conspiracy theories but it’s hardly uncommon for a hotel alarm to go off on the day of a big game. They are now all back in their area of the hotel getting back on track ahead of the game).

Notwithstanding, Sweden and England are set to battle it out at 3pm in the UK time, with England  boss Gareth Southgate hoping to see his team qualify for the semi-finals.

Gareth Southgate has been nicknamed ‘Mr Nice Guy’ after being loved by the British supporters, with the way he acts, can’t be predicted.

The England manager said, “Most of my career I have been killed for that ‘being nice’, It is dangerous because I have got a lot of faults and I have done plenty of things wrong. It’s obviously a nice moment but it’s probably a good thing that we are away. We won the other night but I still had a couple of emails, I have got to change my address, by the way – saying, really good, but you should be picking this one and that one. You can’t please everyone all of the time. I know there was a big thing made of me going up to the Colombia players after the game but for me that’s natural. You have been in a battle with another team and there is huge respect for the fact they have pushed us all the way. It’s easier to do those sort of things when you have won, actually so the mark is when you have got beaten and how you deal with that. It’s easy to be magnanimous in victory. I’m the way I am but I don’t get everything right. I have just got to focus on what I’m doing and what I am is desperate to do well for my country. I’m bloody proud of being English and I’m so pleased the country are really behind us. Football’s got a great ability to unite people and really bring positivity in moments like this, so that is really special. At the moment everyone is choosing to reflect on everything that has gone well and that is very nice. But I know that is not the real world and I have been around long enough to know that the tide changes”.

Southgate used Germany as a study case, narrating how they were eliminated from the group stage after winning the world cup in Brazil last four years. He also stated that looking at what Germany has done in quite couple of years in the tournament; no one saw it that Joachim Loew’s team will be beaten by Mexico and surprisingly the South Koreans’.

He continues, “I’m looking at Germany’s game against Sweden again and they do so many things right but a couple of things don’t quite happen in the other games and they are going home. If he ‘Loew’ hadn’t won the World Cup and had a bloody good record, he would be gone the next day. That’s the reality of it. Equally, I know there will be a shelf-life for me with how people view it. In international football that can be one match, because the differences and the margins are so fine. If we didn’t get over the line the other night against Colombia, then the way it will be looked at is we have beaten Tunisia and Panama and we haven’t won a knockout game. Yes, there’s progress, but I don’t know how long that period will be. Other people will decide that. I know there will be a feeling eventually that everyone’s had enough, time for a new voice, time for a new approach. You have a duty to serve and to try to improve things and make them as good as you can, affect as best as possible for short, mid and long term with the decisions you make. But in any club there comes a point – and it’s the same with the national team – where people have heard the message enough, they’ve listened to the sound bites, and the players want a different voice, the press and the public want a different voice. That will happen at some point. We are trying to build something now but I also know that can change, and in internationals the margins hinge on one or two games every two years. It’s a really fine dividing line and in a low-scoring sport with such random events that affect outcomes there’s a lot more that’s out of your control”.

Southgate also vowed that things will not turn out the way it did during his time as Middlesbrough manager with England, where he was sacked after  a poor outing that led to their relegation.

He said, (There are many different ways of managing and I probably thought maybe I had to compromise at Middlesbrough to succeed, I wasn’t confident enough that was the right thing to do to get results. But as you get older you realise, ‘That’s not what I believe in and if we are going to go down I’ll do it the way I believe is right’. That’s the best way for me).

It’s yet to be seen how England’s encounter with Sweden will play out, as both teams battle for the semi-finals.