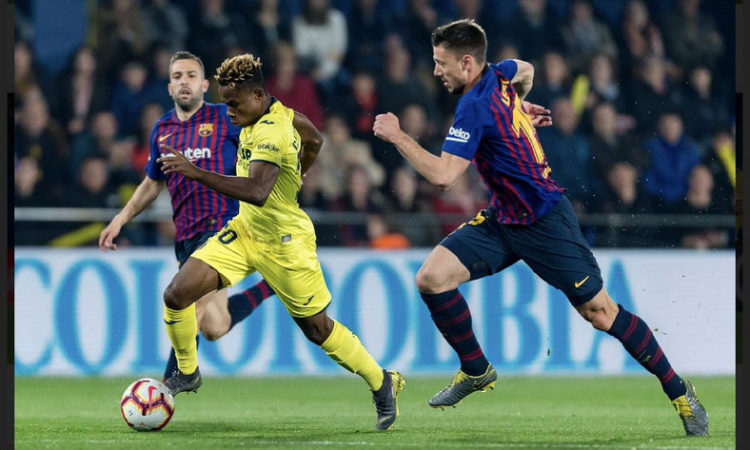 Super Eagles forward, Samuel Chukwueze, was the hero for Villarreal with a goal and an assist as they came from behind to beat Serie A side Bologna 4-3 on Saturday in their final pre-season fixture at the Stadio Olimpico in Serravalle, San Marino.

The 20-year-old came in as a second-half substitute with the game tied at 1-1 then scored a stunning solo goal sandwiched between winning a free-kick which was buried by Santi Cazorla to make it 2-1 and providing an assist for Karl Ekambi to score the winner.

Picking the ball from the right-hand side, Chukwueze ran almost the full length of the opponent’s half dribbling past a plethora of defenders before placing the ball beyond a helpless Bologna goalkeeper with his favourite foot to the delight of his teammates.

A subject of interests from several big clubs in Europe, Chukwueze had an impressive first season with the Yellow Submarines which saw him score crucial goals as they escaped relegation. Read more

Super Eagles midfielder Wilfred Ndidi was in action for 90 minutes as Leicester City were held to a 0-0 draw by Wolverhampton Wanderers in their first game of the 2019/2020 Premier League campaign at the King Power Stadium on Sunday, reports Completesports.com.

Ndidi only resumed training with the Foxes this week but was called into action for the game by Leicester City manager, Brendan Rodgers.

His international teammate, Kelechi Iheanacho was an unused substitute in the game. Read More

Allnigeriasoccer.com has been told Nigeria international Henry Onyekuru has agreed a move to French Ligue 1 club Monaco from Premier League club Everton.
The winger has landed in the Principality to undergo a medical ahead of his move to the eight-time top flight champions.
The Toffees were forced to sell the former Eupen man to Monaco because he was not issued a work permit to play in the Premier League for the third successive season.
An agreement has been reached on contractual terms, with the 22-year-old expected to put pen to paper on a five-year deal.
Onyekuru initially rejected joining Monaco as his priority was to return to Galatasaray where he shone last season but Everton have convinced him that the move is the right one. Read more

Victor Osimhen got his Ligue Un career at Lille OSC off to a flier, better than Osaze Odemwingie and even better than Eden Hazard as he netted a brace on his debut.

Osimhen, who had joined just a week ago from Mouscron, scored the opener for Lille and secured three points for the team with a powerful finish in the 81st minute – the score tied at 1-1. Read more