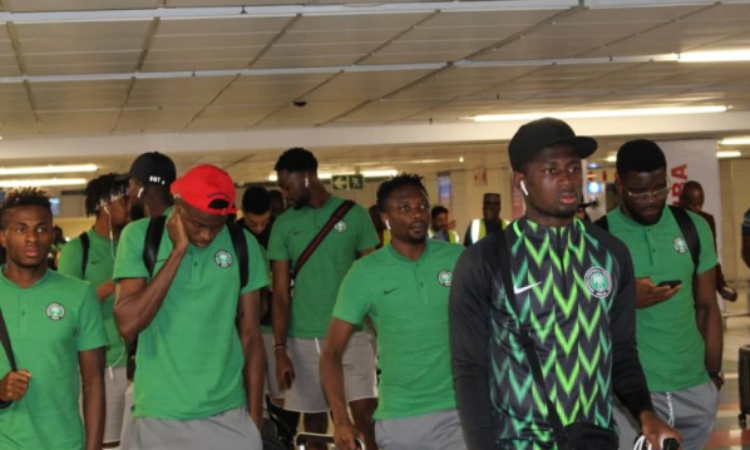 Super Eagles players let loose wads of Naira notes and threw them at adoring fans after their international friendly against the Cranes of Uganda at the Stephen Keshi Stadium, Asaba on Tuesday evening.

Enyimba goalkeeper Ikechukwu Ezenwa started the ‘cheerful giving’ before some of his teammates followed suit.

Technical adviser of the team Gernot Rohr made six changes to the team that played a 1 – 1 draw against the Bafana Bafana of South Africa on Saturday at the FNB stadium in Johannesburg in a 2019 Africa Cup of Nations qualifier.

The Franco-German tactician gave debut start to 2015 U-17 FIFA World Cup stars Samuel Chukwueze and Victor Osimhen who both proved their mettle in the first 45 minute of the encounter.

Although Moses continues to stick to his guns in retiring from the Eagles, footballlive.ng gathered that Musa is echoing the views of most other players and officials in the team, who believe the embattled player is too young to quit international football just yet.

Musa, therefore, wants Moses to reverse his decision to quit the Eagles are return for the 2019 Africa Cup of Nations in Cameroon.

Former Monaco winger Victor Ikpeba was left impressed by the performance of Villarreal rising star Samuel Chukwueze in Tuesday evening’s goalless draw against Uganda and has backed the teenager to make the Super Eagles 2019 Africa Cup of Nations roster.
It was a brilliant debut from the left-footed Villarreal youngster who was menacing and bossed the right flank with his mobility and skills in forty five minutes of action.
Read more here

5. Ikpeba: Rohr Should Work On Super Eagles’ Midfield Ahead AFCON 2019

Former Super Eagles striker Victor Ikpeba has urged Gernot Rohr to fortify his midfield ahead of the 2019 Africa Cup of Nations tournament in Cameroon, reports Completesportsnigeria.com.

The three-time African champions wrapped up their 2018 campaign with a goalless draw at home with Uganda at the Stephen Keshi International Stadium in Asaba Delta State on Tuesday. Ikpeba notes that there were positives from the fringe players who featured in the encounter despite the result.