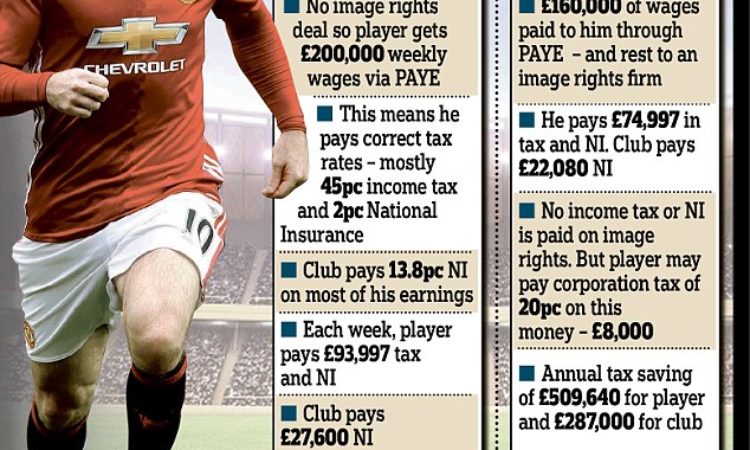 Trending on Taxation Laws of Players in England

January 30, 20180
To say the Premier League is one of the major contributors to the United Kingdom’s economy will unarguably be stating the obvious. The Premier League, which is widely regarded as the most lucrative league on the planet in terms of finance, contributes nearly a billion Pounds in direct taxation to the British economy each season.
Infact,  According to statistics sourced from Ernst & Young (EY) economic impact assessment of the league, it was found that the league contributed £2.4bn to the country’s coffers in the 2013-14 season alone.
Given this ostensibly huge financial revenue, it goes without saying that the English Premier League plays a very important role to the  UK’s overall economy. As a matter of fact, only a few other sectors of the UK’s sophisticated economy can boast of such significant impact on a regular basis and this explains why government ensures top notch regulation in the industry.
Football players are no doubt the single most important group in the football industry with statistics obtained from EY showing they are responsible for over a third of tax revenue generated in the industry. In the 2013/14 season alone, Premier League players paid a combined sum of  £891m in tax to government coffers and in the following seasons, this amount has risen to within a billion pounds.
This piece is particularly dedicated to explaining  the system used in calculating the taxes of players.
In the British well structured tax system, football players are taxed through a pay as you earn scheme (PAYE). What this infers is that taxes on players are generally deducted at the source by the various clubs, with the resultant gross earning then paid to the players.
With this system, players have little control over the taxes they pay and pay regardless of whether they want to or not as the club mandatorily remove the tax(based on the tax rate)  before payment is effected.
This clearly prevents players from trying to evade taxes as is predominant in Spain where several high profile football stars, such as Lionel Messi and Cristiano Ronaldo, have already faced Court actions due to tax evasion.
According to figures released in the Premier League’s latest annual season review,  it was gathered that Premier League and Football League players usually pay 45% tax on earnings over £150,000 (as well as 2% National Insurance Contributions). If a club is making a payment to an image rights company rather than a salary payment through the PAYE system, the player is not being taxed on that income at 45% but rather is paying corporation tax of 20% (falling to 18% by 2020). From a club’s perspective, it does not have to pay employers national insurance contributions at 13.8% on payments to the player’s image rights companies either. Also the national insurance savings for a Premier League club with 25 first team players with a strong commercial programme and a raft of commercial partners can be considerable.
All these are the best practice in the taxation of players.
Post Views: 228
Taxation of Players in England