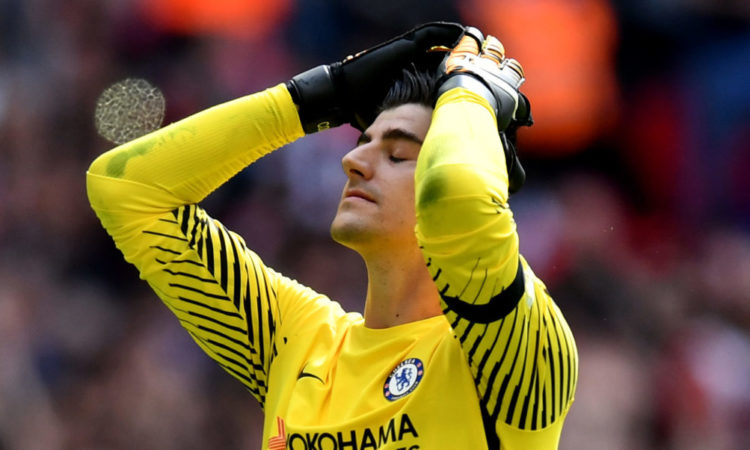 The London based outfit, remains in a huge dilemma as they are yet to secure a new shot-stopper despite the imminent of departure of Thibaut Courtois to Spanish giant Real Madrid.

The 27yr old Belgium international who joined the blues back in 2011, have barely 12 months left in his current deal with the London side and this have raised the possibility of leaving as a free agent after the end of 2018-2019 football season.

Courtois has made no secret of his desire to rejoin his two children and ex-girlfriend in the Spanish capital, with reigning UEFA champion’s league winners Real Madrid his likely destination.

Chelsea have been forced to enter the transfer market, in search of a credible goalie with less than a month with the transfer window. The London based outfit have been linked with Roma’s Alisson Becker, Leicester city’s Kasper Schmeichel as well as reunion with Petr Cech.

Belgian reporter Terreur in his twitter account, confirmed that Chelsea will only accept a transfer fee in the region of 40 million pounds, though the club will finalize arrangement after they have secured a new goalkeeper.

The London based outfit and its supporters, seem to have a different opinion considering the man to replace Courtois in goal. Mirrors Uk, reported that the club recently made a 70 million offer to land Roma’s Alisson. While the club seems to be more interested in the Brazilian, the fans seems to fancy Schmeichel with footballtransfertavern.com reporting that the Danish goalie dominating discussion of Chelsea supporters on Twitter.

Chelsea will have to make a critical decision pertaining to Courtois replacement, as the transfer market approaches its closing stages. The club is expected to make a resolution in the coming weeks.